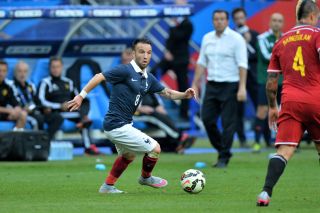 “I struggle to make an impact because I’m small. How do you impose yourself against bigger, more physical players?”
Enrique Hernandez, via Twitter

“Compensate through mobility and technique. When I was younger I struggled because of my size, but over the years I’ve tried to turn it into an asset.

You have to trouble bigger, more physical players through clever movement. Get the ball, lay it off and take up good positions. There’s nothing more annoying than that for a big defender.

I like getting behind defensive midfielders to lay the ball into the strikers and making runs to the wing as you can be forgotten in wide areas. I’m on the go all the time.

My body developed a lot later than my peers, but being small gives you speed over the first couple of yards and allows you to twist and turn away from opponents. That can be a real handful for bigger guys.

It would be harder for me to play against a defender the same size as me than a bigger defender now, because I’ve adapted.

Given my size I also watch players like Xavi and Messi on TV to see how they receive the ball, how they protect it and the runs they make."

For more football tips see:
Leave full-backs for dust
Lucas Moura: Dribble the Brazilian way
How to beat a hatchet man
Steven Pienaar: Playing in the hole
Accelerate and beat your man like Messi