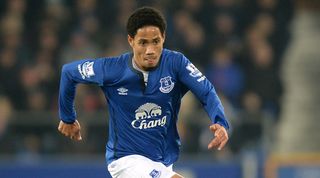 “You have to find space in between the midfield and defence because it’s there that you can cause confusion for the opposition. Opposition defenders don’t like to go all the way out to mark between midfield and defence and the midfielders aren’t sure whether they should drop off. If the midfielders do drop off, the player in front of them will have more space. So if you move in between the lines it can be really difficult for both the opposition defenders and midfielders to mark you.”

“If you play behind the striker you have to have vision, good awareness and close control. When you’re playing in between the lines you have to find space so that you can receive the ball, turn and pick the right pass. You have to take the initiative, you have be alert at all times, but it’s also important to be patient. You should never force the pass. Sometimes it just comes automatically – the space opens up and the striker makes the right run. But if you try and force it and you’re always looking for a world-class pass, then it’ll always go wrong.”

“I occasionally drag defenders out wide but I don’t like to stand out on the wing; I prefer playing more through the middle. So to try to lose my marker I often run two or three yards forward and then quickly check back and change direction. I think that’s the quickest way to lose a defender. Of course, he’s going to try to follow you wherever you go but if you check back suddenly, only you can know what’s in your mind so it gives you a split-second to get away from him.”

"This drill helps me to work on my close control and turning in small spaces. When you’re playing between the lines your first touch is vital and if you don’t have close control, your touch can get you into trouble.

"Often if you receive the ball in a tight space, you have to be able to move past an opposition player with one touch. But if you use your first touch just to control the ball, the defender could go right through you.

"Good control gives you valuable time and it is vital for anyone playing in the hole. It also helps me when I collect the ball from the defence.

"The manager takes us out and we work on our movement when our defenders have the ball. If the centre-back has the ball, I’ll move in and our left-back, Leighton Baines, will overlap.

"It’s a basic pass-and-move that we always do and it works all the time. Creating an understanding is mainly down to a feeling and the intelligence of the players involved."

For more training tips see:
Michael Ballack: How to be the complete midfielder
Andres Iniesta: How to boss the midfield
Yaya Toure: Dominate the middle of the park
Jack Wilshere: How to keep possession