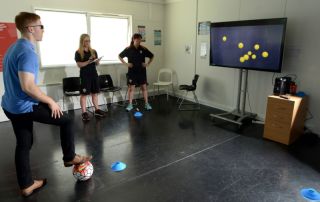 When Southampton goalkeeper Fraser Forster suffered a broken leg last season, he turned to cutting edge technology to aid his recovery from injury.

The 28-year-old feared his reactions and peripheral vision could suffer as a result of his lack of training and match practice.

But the Saints have a secret weapon – a piece of 3D training software called the Neurotracker – to train the brains of players as young as nine-years-old.

Southampton academy psychologist Amy Spence said: “We’ve done testing with players and seen that their cognitive abilities can decline after an injury.

“But the Neurotracker taps into many of the skills you need on the pitch, so you can stay mentally sharp without being in a game situation.

"Fraser uses it regularly and really felt the benefit while he was injured. He's now got into a habit of doing a session on it before he goes out for training every morning."

The device requires the user to track four balls amongst a pack of eight for six to eight seconds as they bounce in random directions across a screen.

Once they have come to a halt, the task is then to pick out those four pre-selected balls. The speed and number of balls tracked can be increased to enhance difficulty.

Two or three six minute training sessions per week are believed to be enough to improve cognitive abilities, with one study revealing a 15% increase in decision making and passing accuracy.

Manchester United were the first club to use the Neurotracker in English football during Sir Alex Ferguson’s time in charge of the club.

Is Borussia Dortmund's Footbonaut the future of training?

Paul Scholes was consistently the best performer, but his former team-mate Park Ji-Sung is the holder of the top score ever recorded at United.

The Neurotracker has also been used by athletes in in a number of different sports, notably American Football team Atlanta Falcons and ice hockey side Vancouver Canucks.

However, if you and your team-mates are looking to use it, you may need the backing of a wealthy Russian owner, as the technology will set you back a hefty £15,000.