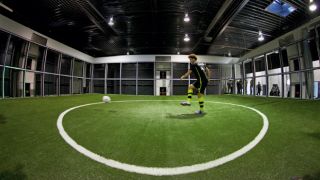 When any Wilhelm no-mates at Bundesliga champions Borussia Dortmund is stuck for someone to have a kickabout with, he can always call upon the Footbonaut.

Using stereotypical automated production line efficiency, the German club has come up with a robotic mini-pitch designed for lonesome players to practise in.

A conveyor belt of balls are fired at a player from any one of the eight ‘cannons’ lining a 14m-square pitch. The player in the middle has a split-second to trap it, before aiming it at one of 64 panels surrounding him.

“It’s great for working on your technique, vision and opening up to feed the ball – it’s as if you are surrounded by 10 colleagues who are there only to serve you balls,” explains Dortmund’s Aussie midfielder Mustafa Amini at the demo – perhaps hinting at how a less automated, more human version of this drill could be done.

As former Republic of Ireland striker and founder of ThinkFitness, Jon Goodman, explains, improving your control, quick thinking and fast passing technique is something you and the rest of your five-a-side team can do ahead of a game with a similar Footbonaut-style drill.

“Set up a drill that involves moving the ball quickly into the centre circle to a player who then needs to control, turn and feed the ball out to one of four players at each corner,” he says.

“Give each player in the corners a number – the passing player calls this number to direct the player in the middle who to pass to.” Simple. And cheaper than a robotic pitch.