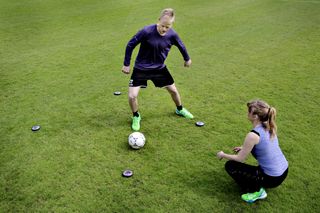 “You’ve got a kid who is smaller than most, he’s got asthma, he’s not the quickest, but he’s the best player I’ve ever played with – work that out!” Gary Neville couldn’t explain Paul Scholes’ genius, but we think we can. Brace yourself: eight flashing lights.

Instead of loading up the squat rack, the pint-sized playmaker went head-to-head with the FitLight training device.

Eight discs, which can be mounted to any surface, flash at intervals, challenging the athlete to react at speed and deactivate them with a swipe of either their hands, feet, head or even a football.

Reaction times are captured by a tablet, ready for analysis. Using the data, coaches can measure speed, agility and co-ordination.

Scholes might have struggled to keep up with Cristiano Ronaldo’s walking pace, but his reaction speed was off the charts, says power development coach Mick Clegg, who introduced FitLight during his time with Manchester United. “With FitLight you’re able to train things that are directly related to what’s happening on the pitch,” he explains. “Paul Scholes wasn’t the biggest or the quickest but his reaction times were incredible – he was able to see everything. His brain was always ticking away.”