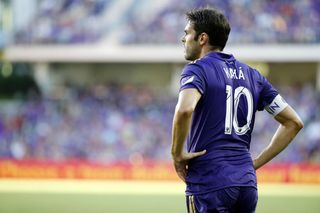 You glide when you are running with the ball – was that a natural gift or something you had to nurture?
Balance is something that I needed to work hard on when I was a young boy in Sao Paulo. I think it’s an important attribute for a player to have, especially when you’re running at speed. Every time I make a pass or have a shot at goal, I have to do that on one foot, so balance is key to staying in control of my body while I execute the technique.

You scored two brilliant goals against Man United in 2007 – one with your right foot and one with your left – how did you become so good with both feet?
It was purely down to practice. When I was young I always trained with both feet, by passing against a wall, over and over again. But I do think you have to improve your best skill and work on your strengths, so I’d always practise more with the right than my left, although I made sure I was comfortable with both feet.

You often went for placement over power in front of goal – why was this?
I always preferred a precise finish because I realised from a young age that I didn’t have a powerful shot. I scored a few goals, which were hard shots, but most of them were placed finishes. I learnt to bend the ball, which made it very difficult for the goalkeeper to save, even if it wasn’t a powerful shot.

You’ve always had a very relaxed demeanour on the pitch – is that a product of Brazilian culture and the country’s approach to the game?
This is just my style I think. In Brazil, it’s about creativity and producing something different. By being calm I could make sense of situations more efficiently. I used to panic when I was younger, but calmness comes with experience. The reason I started running so fast with the ball towards goal was because I was so scared of losing it!

You’ve played in a variety of different formations during your career, which do you feel has suited you best and how did it get the best out of you?
I think in 2007, I had a great period under Carlo Ancelotti at AC Milan. I played as a second forward, which meant I didn’t have too much defensive responsibility. My energy and focus was purely on scoring goals and making assists. This was an incredible period for me in my career.

If you could play in the same team as any current or former player, who would it be and why?
As a Brazilian I would have to say Pele. I’ve watched all the videos of him playing and seen films about him, and it would be great to just have one match alongside him.

You wore the Adidas Predator during your career, what did you love about the boot?
The most important thing is to be comfortable in your boot. Every year I wore the Predator – the boot is part of my history. Whenever I see one of my boots I can remember the game, the period, the goal I scored or something special I did on the pitch. I keep a lot of my old boots – I have Predators in so many different colours. It’s nice to look at them sometimes because they bring back great memories.