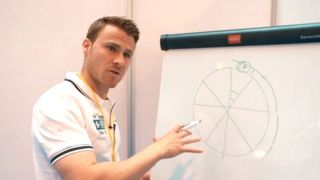 Strikers have an insatiable hunger for goals. They feed off the buzz. When the goals dry up, a striker's confidence nose dives, along with their form.

If they're not rippling the back of the net, how how can they lift themselves out of the doldrums?

Peak performance coach Tom Bates, believes a goal-starved hitman has to look at the bigger picture.

"If a striker was to look at his performance and he was to develop a performance profile, of all of the different areas that he’s responsible for as a striker – scoring goals is just one of his responsibilities," says Bates.

"If you can get the player to see that actually in other areas he is performing, then that will have a positive impact on his performance as he will realise that his performance is much more than just scoring goals."

Follow Bates' guide and bring your goal famine to an end.

The Freeradio Grass Roots Football Show is the biggest grass roots football event in Europe. For more information on this year’s event at the Birmingham NEC on May 25-27 visitwww.grassrootsfootball.co.uk

Also see:
Use your mind to mend your body
Staying performance focused before kick-off
Coping with being dropped
Mind map to your perfect season
Off-season mind gym
Alan Smith: Staying confident during a goal-drought
Strikers: Dealing with a step up in class