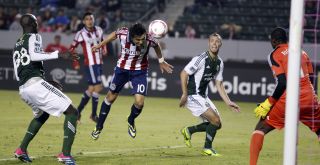 After nine months and billions of miles travelled by knackered footballers criss-crossing the continent (imagine the equivalent of bi-weekly Champions League clashes in deepest Eastern Europe for your favourite Premier League side) the MLS Playoffs are well underway.

In a nod to the sporting traditions of the two countries where the MLS struts its stuff, the culmination of the regular league campaign is only the start of the real action. While there is a gong handed out for the club with the best record of the two MLS divisions combined (the Supporters' Shield trophy, won this year by the New York Red Bulls rather remarkably for the first time in its history) the overall über champ of North America is decided by a play-off system.

This may not always be the most fair way of doing business, but, as with any play-off set-up around the world, from the English Football League to the English rugby Premiership, the reason for such an end-of-year jamboree is quite clear - to keep the punters interested right up to the last second.

On the final day of the Eastern Conference, there were five teams vying for the three available play-off places, where they would join the already qualified New York Red Bulls and Sporting Kansas City. This helped both pack in the crowds and keep the TV revenue flowing in; rather important in a growing sport fighting for sponsorship dollars and media attention against significantly bigger beasts.

As dramatic as this was, the thing you'd find in other leagues across the world but that the USA is lacking was a blood and guts, tears in the stands, relegation battle. For many, it’s a tussle that is even more dramatic and tasty than anything delivered at the 'right' end of the table. Indeed, the opposite is the reality in MLS with the poorest performers of the conferences, DC United and Chivas USA, set to receive the prime draft picks ahead of next year. It's another display of the general philosophy of North American sport that a competition is only as strong as its weakest participants.

The to reason not have a relegation system is rather obvious; owning and running an MLS franchise is an expensive business that is reliant entirely on remaining within the division due to revenues from gates and sponsorship.

“I just can’t see the owner of an MLS team paying $100 million dollars for a franchise, to then somehow be relegated into a second division,” says Adrian Hanauer, part owner and General Manager of the Seattle Sounders.

Another reason the MLS has until this stage done away with the drop zone is that it would run against the policy of growing the competition; and that is patient, carefully planned progression, something that would be interrupted with the expulsion of a franchise simply for having a bad year.

In another dimension, one of those teams to lose its MLS spot this season would have been Chivas USA, whose Sporting President, Dennis te Kloese, argues that clubs like his need to be given the opportunity to progress and the right to fail before bouncing back. “In the end you still need time, and you cannot create a tradition in five years,” said the Dutchman. “Teams are gradually growing in their cities or their areas and regions.”

Even a figure who would stand to benefit from a system of promotion and relegation in North American football, Phil Rawlins, president of Orlando City, understands the need to keep things as they are, and only allow new blood into MLS through winning a franchise.

“In a relegation system, you’d be looking at a DC United, Toronto, Chivas and asking if can we replace them,” notes Rawlins from a leading team in the lower leagues of the US game. “It doesn’t work that way so what the league has to do is enable Chivas to get better and perform better, particularly off the pitch and grow their crowds.”

This is not say that the concept of relegation and the drama it can bring is a no-go zone for the North American game. Adrian Hanauer suggests that something should be done to prevent teams deliberately finishing at the bottom in order to have special treatment in the draft. “We can try to do some things that mimic promotion and relegation without going up and down. For instance, teams that finish at the bottom of our league could be penalised in some way,” says the Seattle Sounders part owner.

It is a sentiment shared by Will Johnson of the Portland Timbers, a player who has played in the Dutch league as well as the US. “If it makes economic sense at some point, and there’s enough money in the sport to add that exciting part of the game then I think that everyone would be all for it,” says the midfielder. “The one thing I can tell you as 100% fact is that they will not do anything to jeopardise the financial stability of MLS.”

And that is the key point on why relegation is an alien concept in MLS. Other leagues around the world have considerably stronger second and even third tiers, so sides like Newcastle, Juventus and Atlético Madrid can even market a “year in hell” and eventually bounce back. An MLS franchise stuck in the North American Soccer League playing the Fort Lauderdale Strikers will not last long. And that is unacceptable for a $100 million investment with failure paying too high a price.