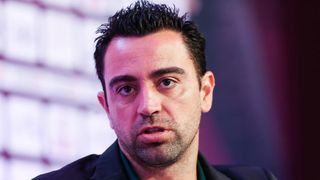 Xavi and Baghdad Bounedjah inspired a superb Al Sadd comeback as the Qatar side earned a 3-1 first-leg win in their AFC Champions League quarter-final away to Esteghlal.

The hosts took the lead in extraordinary circumstances in the 12th minute, an incredible own goal from goalkeeper Meshaal Aissa opening the scoring.

Defender Boualem Khoukhi headed a high pass back to Aissa, who failed to trap the ball and saw it bounce under his foot and roll into the unguarded net.

Al Sadd levelled on the hour mark, though, a clever one-two with Bounedjah freeing Akram Afif to run through and beat Mehdi Rahmati with a powerful finish.

And within five minutes Al Sadd were in front, Bounedjah racing on to an excellent Xavi flick to decieve a defender with a fine turn before slotting past Esteghlal captain Rahmati.

Substitute Hasan Al Haydos then intercepted a loose Rahmati pass to free Bounedjah, who was bumped over in the box by Vouria Ghafouri, the striker smashing in the penalty himself to complete the turnaround.