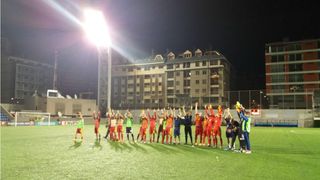 Andorra recorded their first competitive victory in 13 years by beating Hungary 1-0 on Friday thanks to a goal from Marc Rebes.

The tiny nation were bottom of Group B but full of confidence after keeping successive clean sheets in their last two matches.

Andorra had beaten fellow minnows San Marino 2-0 in a friendly in February and maintained their momentum by holding Faroe Islands to a 0-0 draw a month later.

But they had not collected three points in a qualifying campaign since beating Macedonia 1-0 in October 2004, failing to win any of their subsequent 66 competitive fixtures.

They took the lead against Hungary after 26 minutes, Jesus Rubio hanging up a deep cross to the back post that Rebes headed over RB Leipzig goalkeeper Peter Gulacsi and into the net.

It was his first international goal and Andorra held on to win, moving above Latvia in the Group B table after their long-awaited victory, although they are 14 points behind leaders Switzerland.