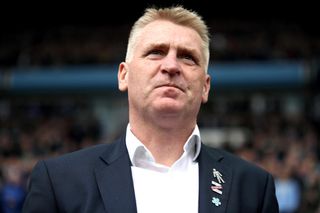 Aston Villa are close to taking their summer spending to around £100million as they near the signings of Douglas Luiz and Bjorn Engels.

Villa have been in talks with Manchester City over midfielder Luiz and Reims over defender Engels.

Luiz could cost Villa £15million as the newly-promoted side continue to splash the cash ahead of their Premier League return.

The 21-year-old captains Brazil’s Under-23s side but has been sent out on loan to Girona for the past two seasons and is yet to make a senior appearance for Pep Guardiola.

He struggled to get a work permit for City, the reason he was loaned to Spain, but it remains to be seen what the situation would be at Villa.

Villa also want to boost their defence with the signing of Engels, a long-time target for boss Dean Smith, who ended his side’s three-year top flight exile by winning the Sky Bet Championship play-offs last season.

He tried to get him while he was Brentford manager last year and has returned for the 24-year-old.

Engels would join Kortney Hause, Tyrone Mings and Ezri Konsa as new centre-backs at the club.

Hause and Mings made their loans permanent, with Villa paying Bournemouth an initial £20million for the latter, while Konsa joined from Brentford for a reported £12million this week.

Villa broke their transfer record to sign Wesley Moraes for £22million from Club Brugge earlier in the summer.