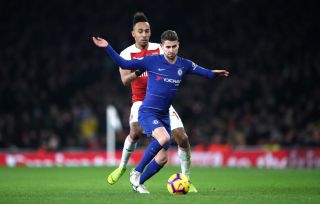 Chelsea and Arsenal will meet in the Europa League final on May 29 after taking a long and winding road to the Olympic Stadium in Baku.

The decision taken by UEFA to stage the final in Azerbaijan’s capital – a city further east than Baghdad and Riyadh – has come under further scrutiny since two clubs separated by just seven miles reached the showpiece event.

Those fans lucky enough to have landed both a ticket – with just 6,000 allocated to each club – and been able to organise travel will also then have to contend with a local kick-off time of 11pm to appease television audiences across the continent.

"On behalf of our fans, we would like to understand the criteria by which venues are selected for finals, and also how supporter requirements are taken into account as part of this."— Arsenal FC (@Arsenal) May 16, 2019

The few direct flights between London and Baku sold out quickly, some even before Arsenal and Chelsea were confirmed as the finalists, while other non-direct routes can take over 10 hours.

It is also a drive of over 50 hours behind the wheel or a potential four-day train ride.

Even if you are a fan with both ticket and travel, you could still find yourself being rejected for an Azerbaijan visa – Arsenal reporting some of their supporters with dual British-Armenian citizenship had come across such an issue.

Hostility remains between neighbouring countries Armenia and Azerbaijan over the disputed Nagorno Karabakh region, where a ceasefire was declared in 1994 after fighting erupted several years earlier.

Arsenal’s Henrikh Mkhitaryan, captain of the Armenia national team, missed the Europa League group game against Qarabag in Baku earlier this season because of the issue.

Once a ball is kicked in anger inside the Olympic Stadium on May 29, attention will hopefully switch to a London derby with plenty at stake.

The success of both Emery and Maurizio Sarri’s respective first seasons in England could be defined in this 90 minutes – plus the potential extra-time and penalties – some 12,500 miles from home.

Emery, who won the Europa League three years in a row with Sevilla and has not lost a knockout game in the competition since 2012, replaced Arsene Wenger last summer with the remit of returning Arsenal to the Champions League.

Their stumbling end to the Premier League season meant they finished fifth, missing out on an elusive top-four spot by a single point.

Victory for the Gunners would see Emery achieve his first aim as well as add a piece of silverware to toast his maiden season at the helm.

The Spaniard will continue in the job even if he is on the losing side, whereas counterpart Sarri does not even have the comfort of knowing victory in the final will be enough to keep his.

The 60-year-old has faced adversity, a common theme among recent Chelsea managers, whether it be supporters lamenting his style of play, his goalkeeper refusing to be substituted late on in the Carabao Cup final defeat to Manchester City or contending with constant speculation that Eden Hazard will leave this summer.

It is a credit to Sarri that he has steered the ship through such rough seas, guiding the Blues to third in the table – already securing Champions League football next year – and taking them all the way through to Baku.

There still may be no room for him in the Stamford Bridge dugout next season, such is the shelf-life of a modern Chelsea boss working under Roman Abramovich.

On the pitch, too, there are plenty of talking points.

Could it indeed, be the last appearance of Hazard – who is seemingly bound for Real Madrid – in a Chelsea shirt? The Belgium forward has reportedly already told the club of his wishes.

Chelsea striker Olivier Giroud joined from Arsenal in January 2018 and will be looking to end the Europa League as top goalscorer as he heads into the final with 10 goals to his name already this season.

To finish as the outright leading marksman, Giroud will need to beat Petr Cech.

The Arsenal goalkeeper will retire after the final which he has declared is his “dream” way to bow out as he comes up against a team where he won no fewer than 14 major honours during a successful spell between the posts.

It may well have been a long road to Baku for the club, players and supporters but even after the final, the journey of some of their main protagonists will be far from over.