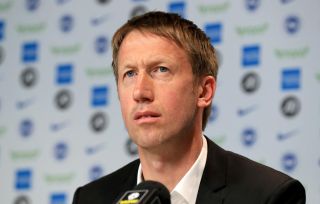 Brighton have dismissed suggestions their appointment of Graham Potter as manager on a four-year contract represents a “gamble”.

Potter was unveiled on his 44th birthday as the successor to the sacked Chris Hughton, having managed in the English Football League with Swansea for only one year.

The experienced Hughton’s departure, after Brighton again preserved their Premier League status and reached the semi-finals of the FA Cup, was also criticised but the club’s chairman Tony Bloom, who built his fortune as a gambler, insists Potter’s arrival is far from a risk.

“I certainly don’t think it’s a gamble,” Bloom said. “Once we’d made a decision to get a new manager in — we’d done a lot of work previously on potential head coaches — quite quickly Graham became the outstanding candidate.

“He’s an excellent coach. He did a superb job at Swansea in really difficult circumstances. He’s great with the players. Sometimes, not making a decision or going for a more obvious choice is a bigger gamble.

“Graham’s appointment fits in perfectly. Any time we hire a new head coach, it is for the long-term. I know that doesn’t always happen the way you want it to, but I sincerely hope and expect Graham to be with us for a long time.”

It is Potter’s reputation as a coach that has contributed to his appointment at a time when he does not expect his new club to heavily invest in their squad, and he also revealed that he has little intention of using the same methods he employed in Sweden with Ostersunds, where that reputation was built.

Those methods included him encouraging players to participate on stage in amateur dramatics in an attempt to remove them from their comfort zones, and he said: “I don’t think you can be as extreme as I was at Ostersunds.

“The players will be happy to hear that on their sunbeds. But the concept that it’s important to understand the individual and the person, as well as the footballer, is a helpful concept to have regardless of the competition.

“I’m not expecting a massive amount (of money to spend). Any football club will look to use the window to try to improve, and that’s a normal process, but my focus has always been on trying to help the players who are already here.

“I have (improved) enormously, on and off the pitch. I had great challenges in turbulent times, especially around the transfer windows. I had the responsibility at a football club who had lost its way, had lost a bit of the belief and identity that it wanted to get back.”

“Graham came up on our radar, in my previous role, of highly promising English coaches for the fantastic work he did at Ostersunds. I was really interested to see the transition into the Championship, and again he came out with flying colours.

“Any player who comes into the first-team squad will have the final sign off by Graham.”