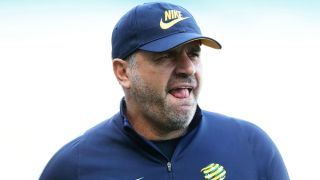 Australia coach Ange Postecoglou has brushed off yet more scrutiny about his future and cleared Tim Cahill to play against Honduras in their decisive World Cup qualifying showdown on Wednesday.

The Socceroos earned a valuable 0-0 draw and were unfortunate not to score at least one away goal in the first leg of the inter-confederation play-off in San Pedro Sula last week.

The fate of the two teams will come down to a tense encounter at Sydney's ANZ Stadium, as Australia attempt to reach their fourth successive World Cup finals.

But Postecoglou's uncertain situation has threatened to overshadow the team's preparations in recent months, with the 2015 Asian Cup-winning coach reportedly considering an exit regardless of whether his team advances.

Addressing the media this week, the former Brisbane Roar and Melbourne Victory boss, who replaced Holger Osieck at the helm of the national team in 2013, was again questioned on his seemingly precarious position.

"You're asking about stuff that, mate, at the moment… I don't know, maybe you guys are different. Maybe if your job was on the line on Wednesday you'd be writing about that and not anything else," he replied.

"I'm coaching for Wednesday night, nothing else. [My focus is] on making sure we win on Wednesday night. Anything outside that, I just don't have the luxury."

Something that is far more certain is Cahill's enduring status as a talisman for Australia, having scored a succession of crucial goals at home and abroad during the past decade and more - including a double that saw off Syria at the previous stage.

Now back home and playing in the A-League for Melbourne City, the 37-year-old was an unused substitute in Honduras but has been given a clean bill of health by his coach after overcoming an ankle injury.

"He's ready to go from the start," Postecoglou said. "He probably could've played on Friday… but with that pitch, the way the game went, we were able to keep him fresh for this one.

"He's certainly ready to go. He trained fully yesterday, he'll train fully today. If he's limping, he's doing it in the room and hiding it from me."