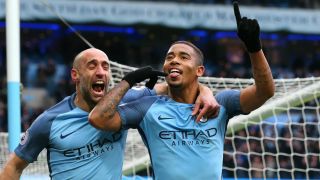 Pep Guardiola says he has been hugely impressed by Gabriel Jesus' start to life at Manchester City and will keep him in his first XI despite Sergio Aguero spending time on the substitutes' bench.

Jesus continued his superb form after joining up with the club in January by netting two goals -Â including a stoppage-time winner -Â in Sunday's 2-1 home victory against Swansea City.

The 19-year-old is only the fifth City player to score in his first two Premier League starts, with his exploits helping Guardiola's men up to third in the table.

Guardiola feels it is obvious that Jesus will keep his place, even though Aguero has been on the bench for each of the Brazil international's recent star turns against West Ham and Swansea.

Asked whether Jesus will remain in the team if he continues scoring, the City boss told Sky Sports:Â "What do you think? Of course, yeah!

"It is not just about the goals. He has this ability and in the first five or 10 minutes against Tottenham [when he made his debut]Â he showed us everything.

"Everybody is delighted with what he has done until now. It is good that he scores goals in that time too.

"He is a real fighter in one-on-ones and duels and of course he is the guy always at the centre of the goal. He is 19 years old so we are so happy with what the club have done and to have him here.

"Gabriel Jesus is strong, fast and has really good movement. He has arrived really, really, well. We are happy to have him.

"Sergio is a good professional. He is professional. Nobody accepts not playing but he could also play with Gabriel, so there is not a problem with that."

Guardiola feels Jesus, who joined from Palmeiras for an initial fee of ÂŁ27million, has a remarkable mentality for such a young player.

"He still doesn't speak English fully so he is not going to understand what people are going to say about him in England, so that will be good," joked Guardiola.

"He is with his mother here and she is a nice person so he has control in his life and I think he is so, so stable.

"I spoke with Fernandinho who knows him from the national team and he told me he is very humble, very shy, a very good guy. So in those terms he will not be a problem."