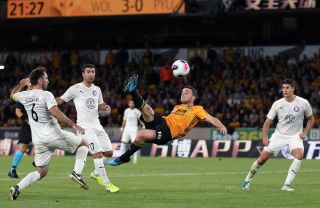 The Portuguese has backed his team-mate’s quality ahead of Manchester United’s visit to Molineux on Monday.

Maguire helped United keep their first clean sheet since February in their opening 4-0 win over Chelsea after becoming the world’s most expensive defender when he moved from Leicester earlier this month.

Fellow centre-back Coady, meanwhile, has been a focal point in Wolves’ rise from the Sky Bet Championship to the Europa League and, despite Maguire’s record-breaking transfer, Jota is siding with his skipper.

Asked if he would swap Maguire for Coady or any of the other Wolves defenders, Jota said: “That is some question! I think Harry Maguire has a lot of quality but I know the players that we have in our team and I trust them.”

England international Maguire was one of three summer recruits by United, along with Daniel James and Aaron Wan-Bissaka, as Ole Gunnar Solskjaer’s men look to improve on a largely disappointing 2018/19 campaign.

Jota added: “It (the £80m fee) is hard to explain. The market is unreal now in my opinion. But nothing to do with me, it is to do with the clubs and it is the moment we are living. We just have to respect that amount.

“It’s a new season. Solskjaer has had more time to work with his players, he’s made his own changes.

“In the transfer market they’ve tried to improve their team so we know it’s going to be very hard for us. We have to understand that we will face a very big team.”

Jota scored in Wolves’ two home wins over United last season when they dumped them out of the FA Cup just weeks before a 2-1 league victory.

Nuno Espirito Santo’s side finished seventh, nine points behind sixth-placed United, last term as they qualified for Europe for the first time since 1980.

But despite being tipped to try to crack the top six Jota remained cautious about making predictions.

“I think it is too soon about the final classification. We got seventh place it’s true but it is very hard to get it again,” said the 22-year-old.

“We have loads of teams that spend more money than us, trying to achieve that position.

“So we have to realise it’s not going to be easy to get seventh. We go game by game and in the end we will see.”