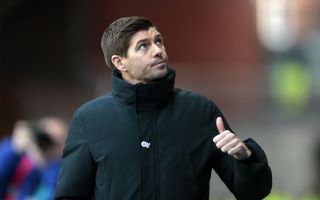 Steven Gerrard insists he will not let the bigots get under his skin after becoming the latest manager in Scotland to be faced with sectarian chants.

The Rangers boss was faced with cries of “sad orange b******” during Wednesday night’s William Hill Scottish Cup clash with Aberdeen.

Police Scotland have confirmed they are now investigating the matter.

The latest incident comes just three weeks after Kilmarnock boss Steve Clarke reacted with fury when he was dubbed a “fenian b******” by sections of the Ibrox support.

And speaking ahead of Clarke’s return to Govan for Saturday’s Ladbrokes Premiership clash, Gerrard urged his side’s faithful to behave themselves.

Asked if he hoped the focus would remain on the action on the field this weekend, the former Liverpool captain replied: “I hope so.

“I think it was my turn against Aberdeen. But I’m fine.

“Words have never hurt me. I’ve had a lot abuse at a lot of stadiums but I’m totally fine with that.

“Let’s hope we’re talking about the football. Again I’ll ask our supporters to behave in a proper manner and get behind the team.

“Steve Clarke is not the only one who has had that of late, but I’m fine with that. It’s no problem.”