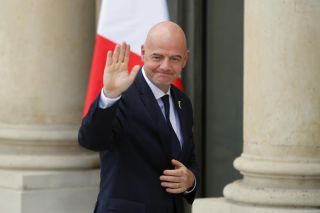 Gianni Infantino will run football’s world governing body FIFA for four more years after being elected by acclamation for a second term as president in Paris on Wednesday.

The 49-year-old Swiss-Italian was the only candidate, so his election was never in doubt, and the traditional vote was replaced with a round of applause at FIFA’s 69th Congress.

In his closing speech, an emotional Infantino thanked the delegates from FIFA’s 211 member associations for their support and promised he would “not stand still” but would continue to develop the game and “defend football”.

His priorities would be the creation of more youth competitions, a continued push on women’s football, more investments in technology and the organisation of a “world convention on football development”.

Infantino used his opening speech, however, to list his achievements since taking over at an extraordinary congress in February 2016.

That was when he was given the task of restoring FIFA’s reputation after the corruption scandals of 2015 which brought down his predecessor Sepp Blatter and a generation of football administrators with far higher profiles than his own.

“We have turned things around. FIFA has gone from being toxic, almost criminal, to what it should be, an organisation that develops and cares about football.”

Gianni Infantino has been re-elected as president of football’s governing body @FIFAcom Here is a picture of GFA NC President Dr. Kofi Amoah and Mr. Infantino after his re-election on Wednesday June 5 in Paris pic.twitter.com/Z13hX8JeCr— Ghana Football Association (@ghanafaofficial) June 5, 2019

Starting with money, which he admitted was at “the core of FIFA’s problems” in the past, Infantino said the federation has never been in a stronger position and its work is now completely “open”, with “thick finance and governance reports” and external audits that track every penny it invests in development projects.

In regards to the bottom line, he said the four-year budget has grown from 5billion US dollars (£3.9billion) in 2014 to 6.4billion dollars (£5billion) now, “at a time when people said nobody would want to be associated with FIFA and when we were coming from our worst crisis”.

He said FIFA’s cash reserves had almost tripled to more than £2billion, despite tripling the amount it distributes to its members to grow the game.

“We’re not spending it on dodgy deals, we’re investing it with you and checking that it is done,” he said.

He then moved on to the decision to expand the 2026 World Cup from 32 to 48 teams, claiming it would give “50 or 60 more countries the chance to qualify” and that would encourage them to invest more in football.

The former UEFA secretary general then reminded delegates of last summer’s “best ever” World Cup in Russia – the tournament that generates more than four fifths of FIFA’s revenue.

“We were told it was a racist, violent and autocratic county but what did we have? We had a party atmosphere because football unites,” he said.

“So we need to say thank you Russia, it was perfectly organised, it was a celebration.”

Infantino hailed the introduction of video assistant referees as “probably the biggest success story” for FIFA and the rule-making body IFAB in last decade.

The women's game in front of one billion viewers? An exclusive interview with one of the most influential women in football.— Olympic Channel (@olympicchannel) June 5, 2019

On the fight against discrimination, he noted that women were allowed to watch the Asian Champions League final in Tehran for the first time in 40 years and said first steps had been taken towards getting more women into senior positions at FIFA.

This led him to his final point and this week’s biggest football-related story, certainly in France: the start of the Women’s World Cup on Friday.

“We’ll see the explosion of women’s football – a big event, one billion viewers, athletes with technical skills and we’ll all be proud,” he promised.

He concluded “this is not the end, it’s just the beginning” – and, on the evidence at congress, there would appear to be few who disagree.