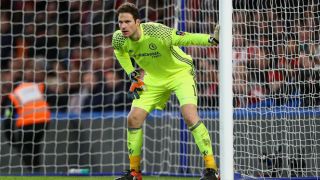 Bournemouth manager Eddie Howe refuses to be drawn on the prospect of signing Asmir Begovic from Chelsea before the transfer deadline.

The 29-year-old has confirmed that he would like to leave Stamford Bridge in order to find first-team football, having made just five cup appearances this season.

Bournemouth have been linked with the former Stoke City goalkeeper, but Chelsea boss Antonio Conte said last week that he would only allow Begovic to leave if a replacement can be brought in.

Speaking on Monday ahead of his side's Premier League clash with Crystal Palace, Howe confirmed that they were exploring options in the market, but would not specify if Begovic is among them.

"I never comment on individual targets from our perspective," said Howe. "We've been active in the market, looking for players, but I wouldn't give you any clarity on a position.

"I'm not going to give you anything on [Begovic] I'm afraid. Sorry to disappoint you.

"This is the most difficult transfer window I've been involved in; the pool of players is so small.

"We have been looking, but we'll see what happens. Any player has to benefit the team."

He added of goalkeeper Artur Boruc: "Artur's played very well and I'm happy with him."

Cherries striker Callum Wilson is another to be linked with a move, with West Brom boss Tony Pulis claiming he had been informed that the striker might be available.

But Howe ruled out the prospect of a £20million exit for the 24-year-old, although he did state that Max Gradel could be allowed to leave.

"We might be losing one or two, possibly on loan," he said. "Callum Wilson's not for sale, he's a massive part of our plans and our future.

"We haven't seen Max Gradel yet, we may see him today. There's a possibility there could be movement on him, but nothing's guaranteed."