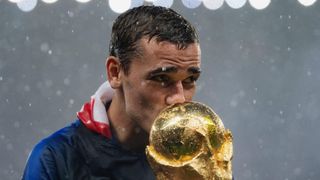 Antoine Griezmann is ready to answer David Beckham's call after revealing plans to end his career in the United States.

The Atletico Madrid forward only turned 27 in March, but a future spell in MLS is already on his radar.

Miami or Los Angeles are his preferred destinations, with Club Internacional de Futbol Miami – otherwise known as Inter Miami CF – in the box seat thanks to their famous part-owner.

The Beckham-owned franchise enter the competition in 2020 and Griezmann would not hesitate to link up with the former Manchester United and Real Madrid star.

"If Beckham wants me in his club then I'll go," the France international told L'Equipe.

"I want to finish my career in the US. I don't know yet if it's going to be in Miami or Los Angeles. Two great cities.

"I like the mentality and the show culture of the US."

Griezmann's move may have to wait a while yet given the World Cup winner's contract with Atleti runs until 2023.

“This is such a proud day for myself and for the entire team. It’s an honour to announce the new name and crest to our fans." - David Beckham, Miami MLS Owner and President of Football OperationsSeptember 5, 2018