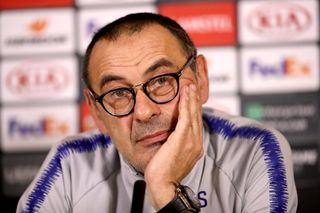 Maurizio Sarri’s future at Chelsea may be up in the air, but the Italian insists it does not hinge on winning next week’s Europa League final.

Sarri’s position as Blues boss is still under scrutiny despite what he maintains has been a “very good season”, which could become “a wonderful season” if they beat Arsenal in Baku.

The 60-year-old will discuss his future with the Stamford Bridge hierarchy following Wednesday’s final, but only to find out “if they are happy with me or not”.

As for whether next week’s all-English showdown will determine whether he stays or goes, Sarri insisted: “No. If the situation is like this I want to go immediately.

“You cannot (do) 10 months of work, and then I have to play everything in 90 minutes?

“It’s not right. It’s not the right way. You’re either happy about my work or you’re not happy.”

Reports in Italy have surfaced linking Sarri with Juventus and Roma, but the former Napoli boss, who has two years remaining on his contract, says neither have been in touch.

“My future is Wednesday, I think,” he added. “I need to think only about the final at this moment.

“I have two years of (my) contract here, so I have no contact with other clubs at the moment.

“As you know, I like the Premier League. Very much. It’s the most important championship in the world. It’s very exciting to be here.

Sarri would not shed any light on whether the final would be Eden Hazard’s last game for Chelsea.

The Belgium forward has been heavily linked with a big-money move to Real Madrid, but Sarri said:  “I don’t know. I want to respect his decision.

“I hope that he will stay with us, but we need to be ready if he decides something different. If I have spoken with him I don’t want to say anything.”

Despite the news today as I had already said to everybody before , I’ll make decision about my future after the last game . Now my sole focus is to win the EL with @Arsenal .— Petr Cech (@PetrCech) May 21, 2019

Wednesday’s showpiece throws up the unusual prospect of Gunners goalkeeper Petr Cech playing his final match against Chelsea amid reports he is in line to return to Stamford Bridge as sporting director.

But Sarri would only say: “I don’t like to speak about an Arsenal player.

“He’s a professional player, he has to play for Arsenal until the end of June, so I want to respect the player and the club.”

While Chelsea have already qualified for next season’s Champions League, Wednesday’s match provides Arsenal’s only chance to join them.

Sarri, who has previously questioned the motivation of his players, said: “In this moment, we risk having less motivation than the opponents.

“But probably they have more pressure on them than we do at the moment. So there is a positive side and a negative side in both.”