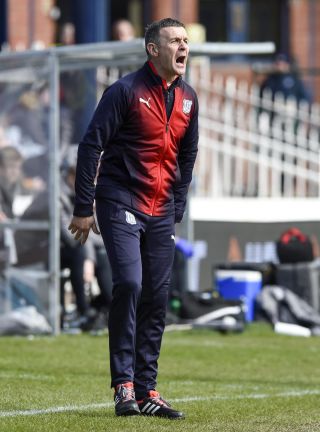 Dundee manager Jim McIntyre knows his side will need a minor miracle to survive in the Ladbrokes Premiership following Saturday’s 2-0 defeat at St Johnstone.

A fourth successive Tayside derby defeat of the campaign and St Mirren’s weekend win at Livingston combined to open up a six point gap at the bottom of the table with games running out.

Second-half strikes from Scott Tanser – with a superbly flighted 25-yard free-kick – and striker Callum Hendry paved the way to an easy victory for a Perth side determined to hold onto seventh position.

The Dens men look devoid of confidence after eight games without a point.

They head to Motherwell this weekend on the back of a lame derby defeat.

“It’s a major disappointment. We were so guilty of giving the ball away in key areas and I felt we showed a lack of quality on the ball,” admitted McIntyre, who lamented the basic mistakes which riddled a below par performance.

“As soon as they cross the line they have a job to do. They know what it is as we work on it enough, so they have to carry it out.

“We haven’t been good enough at doing that and that’s why we are in this situation.

“That is my responsibility, it is my team, my signings. We have to try and get some positive results.

“We get out of this by winning a game – it is simple. Until we do that then you are going to struggle.

“We’re not stupid. We know we need to probably win four on the bounce to still have a chance. That’s the reality of it.

The superior Perth side might have won by a more comfortable margin.

“Matty is an exciting player and he has a good partnership with Scott.

“It is a great free-kick. Scott has a lovely left foot and he has grown into a really good all round full-back.

“I don’t think our keeper Zander Clark had a serious save to make and we only had one scare near the end.

“I didn’t know about making history by beating Dundee four times in a season.

“We have done well against teams below us this season.

“It is tough to beat a team four times in a season so I am pleased.”