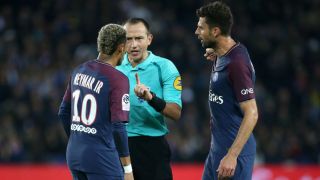 Joining Real Madrid instead of trying to inspire Champions League success at Paris Saint-Germain would see Neymar shirk a "real challenge", according to his former team-mate Thiago Motta.

Neymar signed for PSG at the start of the season in a world-record move from Barcelona which cost €222million.

Some suggested he was the final piece of the puzzle in PSG's obsession with Champions League success, but for a second year in a row they failed to get past the last 16.

Despite consistently starring on the pitch, scoring 19 times and setting up another 13 in Ligue 1 before injury ended his season in February, Neymar has often cut a distracted figure, with reports regularly claiming he wants to move to Real Madrid.

But Motta, who is set to become the coach of PSG's Under-19s, has advised him to resist such a move, suggesting joining Madrid would be the easy decision.

Speaking to Le Parisien, Motta said: "I think he [Neymar] is the boss [of his destiny]. He is able to make his own decisions and impose them. I could be wrong, of course, but that's how I see it.

"For me, he will stay next season. We hear about Real Madrid, but what would he do there? Real has just won three Champions Leagues in a row.

"What would be the challenge for him? If he asks me for advice, I would tell him not to go there. The real challenge for Neymar is to win the Champions League with PSG.

"Neymar needs to be happy to be on the field. When all goes well, he smiles, dances, puts on music and the three hours that we spend together in training run at one go.

"But sometimes I saw him arrive in the morning and I said to myself, 'oh, it's going to be difficult today'.

"This could be related to his personal life, to what he had eaten at breakfast. But what in another goes unnoticed, at home it is seen right away because everyone pays attention to him."