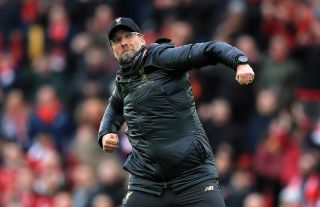 The battle for the Premier League title race between Liverpool and Manchester City continues this weekend.

Liverpool to put the pressure on City?

Jurgen Klopp’s side will be looking to beat Huddersfield at Anfield and then sit back and hope Burnley can do them a favour on Sunday, unlike rivals Manchester United did on Wednesday night. City’s one-point lead means destiny is in their hands, but they face another stern examination at Turf Moor, against a Burnley side who have won three and drawn one of their last four matches.

Ole on @PaulPogba: "He's been fantastic for us and he's a leader in the dressing room and on the pitch. He's creating chances, scoring goals, doing loads of work but he's human." #MUFCpic.twitter.com/DPp5c5jSeo— Manchester United (@ManUtd) April 26, 2019

With the honeymoon period well and truly over, United’s new boss will be itching for any kind of victory over Chelsea at Old Trafford on Sunday. A win would prove a huge shot in the arm in their Champions League qualification bid. But more than that, a victory now would quell some of the growing talk against the Norwegian, whose side have lost seven of their last nine games in all competitions. Already there are questions as to whether United made a mistake in handing him the permanent job. Solskjaer continues too to insist Paul Pogba will be a United player next term, and a happy one at that, amid plenty of conjecture the Frenchman still wants out in the summer. The deeper problems will take longer to soothe, but a sticking-plaster victory this weekend would at least tend to the wound.

Bragging rights will be far from Tottenham’s chief concern when hosting West Ham on Saturday lunchtime. Spurs can take a giant leap towards a third-place finish with victory over the Hammers, fresh from their last-minute win over Brighton. The manner of turning a likely draw into a late 1-0 win over Chris Hughton’s men in midweek could well pep Spurs up for the final tilt. And were results to go their way this weekend, Spurs could even wind up six points clear of fourth place with two games to play.

Watford-Wolves clash again for best of the rest crown

Wolves have spent their first season back in the top-flight mauling as many of the big six at Molineux as possible, not least Arsenal last time out. That 3-1 win over the Gunners saw them leapfrog Watford in the race for seventh place. But just one point separates Wolves from their FA Cup semi-final vanquishers Watford. After the heartache of Wolves’ extra-time loss to the Hornets at Wembley, Nuno Espirito Santo’s men will be out for revenge at Vicarage Road. And whoever comes out on top this time will inch ahead in that quest to finish seventh.

Eight games without a win in all competitions has left Brighton in freefall, but a win over Newcastle this weekend would still go a long way to saving Hughton’s side. With Newcastle safe from relegation, Brighton will be hoping Rafa Benitez’s outfit already have their minds on the beach. Cardiff on the other hand can ill afford anything other than a win, and Neil Warnock will whip his side up to a fever pitch for their trip to Fulham.