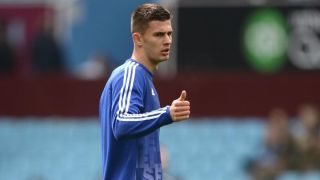 It's been an up-and-down week for Matt Miazga.

Four days after Miazga was sent off in the U.S. Under-23 national team's Olympic qualifying defeat to Colombia, the 20-year-old made a steady Premier League debut in Chelsea's 4-0 win Sunday at Aston Villa.

Miazga went the full 90 minutes alongside Branislav Ivanovic in central defense, with regulars Kurt Zouma, John Terry and Gary Cahill all sidelined by injury. The match marked Miazga's first competitive appearance for Chelsea since signing with the club from the New York Red Bulls in January.

The New Jersey native led all Chelsea players with nine duels won in the match while making five clearances and connecting on 41 of 56 passes.

Chelsea rolled to victory behind two goals from Pedro, along with strikes from Ruben Loftus-Cheek and Alexandre Pato.