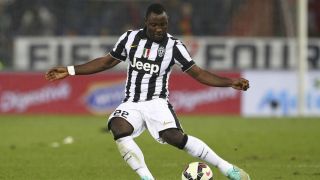 Ghana will look to confirm their place in the 2017 Africa Cup of Nations with victory in Mauritius as Avram Grant's side continue to operate without star midfielder Kwadwo Asamoah.

The Juventus player has endured an injury plagued couple of seasons and has not turned out in national team colours for almost two seasons.

He returned to enjoy a run of matches for Juve towards then end of their latest triumphant Serie A campaign but Grant opted to err on the side of caution rather than risk the 27-year-old against a team the Black Stars hammered 7-1 in the reverse fixture.

"Well, Kwadwo is not 100 per cent fit and he did not play in the last two games for his club," Grant told reporters.

"He hasn't played a lot football in the last year and half and we can only hope next season is better for him.

"He is a quality player and I hope he will get a good run of games next season. But this time around we cautiously left him out."

Mauritius recovered from their humiliation in the opening round of qualifiers a year ago to chalk up back-to-back 1-0 home wins over Mozambique and Rwanda.

Les Dodos are certainly a different proposition on home turf, a fact underlined by a 5-0 loss in Rwanda that leaves both countries level on six points – four behind Ghana with two matches to play.

"Ghana is one of the best football countries in Africa and boast quality players but we will teach them that football in recent times has no minnows. Anybody can become a winner so they should expect a bitter lesson," Mauritius Football Association president Sohba Mohammad Ally Samir told Otec FM.

"Our players are not greedy so they don't take money before representing the country, rather [they represent the country] with pride. They play to make the nation and the supporters proud and loud."

Atletico Madrid midfielder Thomas Partey is in line for an international debut for Ghana, who welcomed Leicester City's Joe Dodoo into their training group.

Former England Under-18 forward Dodoo will not feature against Mauritius as he waits for FIFA to finalise his availability to represent the country of his birth.