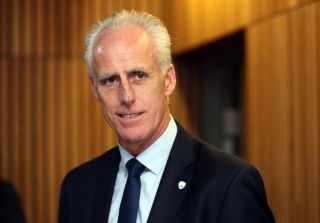 Mick McCarthy admits he already has butterflies as he prepares to send the Republic of Ireland into Euro 2020 qualifying battle in Gibraltar.

The 60-year-old former Ireland defender has almost 1,000 games under his belt as a manager, but the nerves will again be there when he walks out at the Victory Stadium on Saturday for the first game of his second spell in charge.

Asked at his pre-match press conference if he still gets nervous or excited, McCarthy said: “Yes, the butterflies are there already, actually.

“They’re just starting – and it’s not because I’m in here speaking to this exalted company, believe me, although it’s part of it.

MMcC: If we're going to gain momentum in this campaign, it has to start here in Gibraltar tomorrow!— FAIreland ⚽️🇮🇪 (@FAIreland) March 22, 2019

“It’s part of the build-up to the game and it’s getting closer and closer, so yes, I have got that feeling – and I’m glad I have because if I lose that, then there’ll be something wrong because it’s been with me from the first game I ever played.”

McCarthy’s return to the Ireland dugout comes after predecessor Martin O’Neill presided over a dismal 2018 during which his team won only one of nine games.

However, skipper Seamus Coleman, who will win his 50th senior cap in Gibraltar, has insisted that will be a distant memory as he and his team-mates embark upon a new campaign.

Coleman said: “The last campaign has gone now. This is a fresh campaign. We’re looking forward to what’s ahead of us, and winning games is what we all want to do. It’s what the manager will want to do, and as players, that’s what we want to do.

“We’ve had the Euros before and to qualify for any major tournament with your country is massive, and that starts tomorrow night.”

Ireland will not only have to cope with a Gibraltar side which has improved rapidly under new head coach Julio Ribas, and the plastic pitch on which UEFA finally ruled they can play their home games, but also a severe weather warning, with strong winds lashing the Rock.

However, McCarthy is confident his players will take all that in their stride.

He said with a smile: “You are aware where we play out football? We don’t play in ideal conditions all the time in terms of weather, bearing in mind that I started at Barnsley, been at Sunderland and been to Glasgow.

“That’s nothing that concerns me. I can’t do anything about that. It is what it is. We’ll just get on with it.”

However, McCarthy has repeatedly warned against treating the Gibraltarians lightly and admitted Scotland’s 3-0 defeat in Kazakhstan might just serve as a timely warning.

He said: “We’re really well aware of what can happen. I know [Scotland boss] Alex [McLeish] and I know he’ll have gone across there and done everything properly and they got a really bad result, so if it’s anything, it’s a stark warning to us what can happen.”

McCarthy was in jovial mood as he prepared for a fixture his side realistically must win if they are to have a chance of qualifying for the finals, for which Ireland is one of the hosts, although he was remaining coy about his team selection.

Asked when the players would know who is starting, he said: “I might email when they’re all in bed so they get it first thing in the morning!”