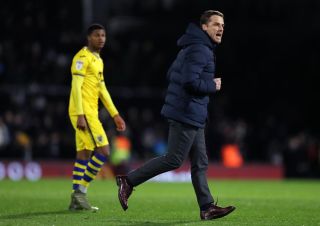 Mitrovic headed his 23rd goal of the season from Aboubakar Kamara’s cross moments after seeing his spot-kick saved by keeper Freddie Woodman.

The victory was Fulham’s first win in four games and keeps them within five points of second-placed Leeds.

And Parker believes the manner of the success spoke volumes about the progress of Mitrovic and the rest of his players.

The Fulham manager said: “I have been in this job for a year now and speak to the players about the detail and the way we want to play. But I talk about mentality more times than anything.

“We have had some disappointing results here and have fallen short of that side of the game in terms of what top teams do.

“But top teams do what we have done tonight. We missed a penalty and there was an option for Mitrovic to think this was not his night.

“But he had the desire and mentality to know it had to go on his head. That’s what pleases me most and that’s a big moment for me.”

He added: “People forget how young Mitro is. He is only 25. I say to him that top strikers have a mentality about them.

“Sometimes he lacks that belief and it’s moments like this tonight that will help make him understand what determines whether you are a top class player or team is how you react.”

Steve Cooper believes his side should have had three penalties before referee Tim Robinson adjudged Fulham’s Neeskens Kebano to have been fouled by Connor Roberts.

And the Swansea manager intends to register a complaint about the performance of the match officials.

He said: “We are struggling to look past the penalty decisions which were cruel on us, all four of them.

“I’ve been to see the referee and I’m not going to criticise too much here. But we’ve just said we have to report this beyond the normal system of reporting referees’ performances because we can’t let this happen.

“We need to help the game. If we don’t share our feelings we won’t be helping the game.

“The whole team did well tonight. Apart form an early shot I can’t think of another clear chance they had before the penalty.

“It’s a tough one at the moment. We have been unfairly treated tonight by the officials.