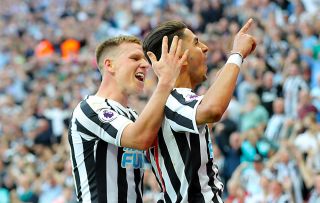 Hat-trick hero Ayoze Perez has urged Newcastle not to take their foot off the gas as they attempt to match last season’s top-10 Premier League finish.

The 25-year-old Spaniard’s first treble for the club secured a 3-1 win over Southampton on Saturday evening to lift the Magpies to 41 points, 10 clear of Cardiff in the last remaining relegation berth, and effectively safe.

However, he insists they will not rest on their laurels, despite climbing into 12th place with three games remaining.

Perez told NUFC TV: “We need to have the ambition to go into the next game and fight for the three points knowing that getting them, we’re going to be in an even better position. That’s the way we have to think.

“There are three to go, not long now. The main job is done, but we have to have the ambition to keep climbing.”

Perez took centre-stage at St James’ Park when, minutes after James Ward-Prowse had escaped a red card for cynically blocking Miguel Almiron’s run on halfway as the Paraguayan and Salomon Rondon staged a two-on-one breakaway, he fired the Magpies into a 27th-minute lead with an astute finish.

He doubled his tally from Rondon’s inviting cross four minutes later and, after Saints substitute Mario Lemina had sparked a concerted fightback with 59th-minute strike, headed home his third with time running down.

In the process, he took his tally for the season to 11 goals, 10 of them in the league, where his career total of 40 catapulted him into the club’s top-10 Premier League scorers.

Perez said: “I still have to think about what I have achieved because it means a lot. It’s something very serious, to be fair, something to be proud of if I am in that top-10 list of such a big club, and I am there, my name is there.

“I’m very proud, very proud to have been at this club these five years and to be in that list.”

For Southampton, the quest for the remaining points they need to stay up continues at Watford on Tuesday night, with manager Ralph Hasenhuttl calling for more of what he saw in the second half on Tyneside.

Hasenhuttl said: “We have made a very good performance in the second half of the season, but we still are in trouble, that’s for sure, and to be five points ahead at the moment of Cardiff, it’s more than we could expect.

“The journey is still a tough one for us, but now is the moment to bring the heads up because we played a very good game last week and deserved to get points.

“Today we were in the crucial moments not lucky enough, but maybe because we were not investing enough and that’s what we have to do on Tuesday, invest a little bit more and then maybe the luck will also be back on our side.”