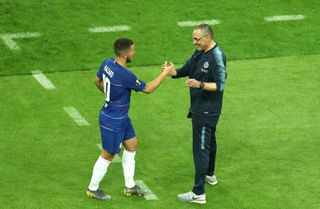 Maurizio Sarri will work out which of his systems can prove the best fit for Juventus after witnessing Chelsea’s reliance on Eden Hazard cause defensive issues elsewhere in the team.

The Blues agreed on a compensation package with the Serie A champions – understood to be worth in excess of £5million – for Sarri, who signed a three-year deal with Chelsea when appointed last summer to replace Antonio Conte.

Despite some negative reaction from sections of the Chelsea fan base who were not convinced by his style of play, Sarri guided Chelsea to the Carabao Cup final, where they were beaten on penalties by Manchester City, and a third-place finish in the Premier League.

The Italian ended the campaign on a high as Chelsea defeated Arsenal in the Europa League final before taking up the opportunity to return to his homeland.

Chelsea’s victory in Baku proved to be Hazard’s farewell appearance before the Belgium playmaker completed his 150 million euro (£130million) move to Real Madrid.

Former Napoli boss Sarri addressed the Italian media for the first time as Juve manager on Thursday morning, with the 60-year-old asked about what sort of approach fans should expect.

“You can’t just start with a system and send players away or take new ones,” Sarria said at a press conference broadcast by Juventus club media.

“The very first step is to study the characteristics of every single player in order to discuss and share, then adapt the module to the players who can really make the difference.

Sarri continued: “The 4-3-3 at Chelsea was a 4-3-3 that was different from the one I implemented at Napoli.

“In that case, I had to follow the characteristics of Eden Hazard, which could obviously solve lots of situations but might also have some contradictions in the defensive phase that we tried to solve.

“So (at Juventus) let’s start from the players’ characteristics, try to understand what players can really make a difference and accompany them on this path, try to use them where they are at their best.”

Sarri, though, rejected suggestions his sides only play one way. “In the last few years I always started the season with one formation and then ended it with another,” he said.

“I don’t know what ‘Sarrismo’ (Sarri-ball) is. I read about it but I have always been so, changing thanks to experiences but remaining faithful to the concepts.

“I am a direct person, perhaps too much, and this leads to clashes but they are solvable.”

Former manager Massimiliano Allegri left at the end of the season with Juve winning an eighth successive Serie A title.

“I’m happy to be at the most important team in Italy and this is a further step forward after the experience at Chelsea,” said Sarri, who believes his season under the media spotlight in England has made him a stronger person.

“It’s the crowning achievement of a long career, that for 80 percent of it was extremely tough.”

Sarri sported a club suit at his press conference but joked negotiations would continue over whether he would be back in a tracksuit when he takes to the dugout.

“I would prefer not to wear the suit and tie on the pitch,” Sarri said.

“The important thing at my age is that they don’t send me out there naked.”