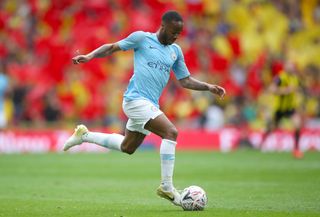 Raheem Sterling would be keen to speak to the Football Association and the Premier League over the summer to work out the next steps in the ongoing efforts to combat racism.

The England and Manchester City forward has said social media boycotts and gestures such as wearing t-shirts during warm-ups are “not enough” and has called for “harder punishments” such as nine-point deductions for racist incidents.

Speaking at the Wall Street Journal’s Future of Everything Festival in New York, Sterling said with City’s domestic treble-winning season now over he would be keen to discuss ways the campaign can be developed.

Soccer star Raheem @sterling7 talks athlete activism and shares his perspective on the sport’s future at The #WSJFuture Of Everything Festival. https://t.co/lPvhawB8BI— The Wall Street Journal (@WSJ) May 21, 2019

“You can get caught up with training every day, and games every two, three days, so you don’t really have a lot of time to be out speaking to people,” he said.

“But in my off time and holidays, if I can get around and speak to the Football Association and the people in the Premier League, and see how we can look about doing things better in the future, for sure I’ll be there in person to try and do that.”

The 24-year-old has emerged as a key voice in the campaign against racism for his readiness to speak out on the issue.

After he was allegedly racially abused by spectators at Chelsea in December, Sterling used Instagram to criticise the media for the way they report on black players.

He said he was then contacted by football authorities with ideas about the campaign but did not agree with their approach.

“After the situation at Chelsea they came to me with an idea but I did not agree with the idea,” he said.

“It was a social media blackout. I said I simply don’t agree with what you want to put out. It is a social media post that’s going to happen for one day. In two days’ time it will all be forgotten about.”

In April, the Professional Footballers’ Association launched the #Enough campaign, which saw footballers in England and Wales boycott social media for 24 hours to protest the way the social networks have handled cases of online abuse.

But Sterling has said he wants to see stronger punishments those on the receiving end would not be able to ignore.

“Teams getting (points) deductions, teams getting kicked out… this is when people start taking it seriously,” he said.

“If I go to a football game and I support Manchester United, for example, I don’t want to be the person that lets my team down by saying silly remarks in a stadium.

“If you know your team is going to get deducted nine points and not win the league, you are not going to say these racist remarks even though you shouldn’t have it in your head.

Although this season has seen a number of incidents in England and abroad, Sterling believes the situation has improved in the last decade.

“Ten years ago it was a lot, lot worse than it is now,” said Sterling, who was named PFA Young Players of the Year and Football Writers’ Association Football of the Year at the end of a campaign in which he scored 25 goals for City.

“It’s starting to get better and people are understanding that they can’t say certain things.”