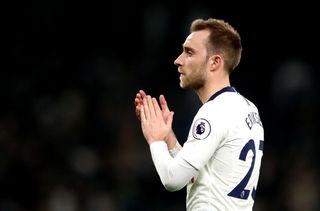 Christian Eriksen‘s future is a hot topic in the papers amid reports Real Madrid have already reached a verbal agreement to sign the Tottenham midfielder. The Daily Mirror says Spurs chairman Daniel Levy is expected to demand a fee of up to 150million euros (£129million) for the 27-year-old. According to The Sun, however, the Spanish giants are willing to wait until 2020 to land the playmaker on a free transfer.

Manchester United’s Paul Pogba will reportedly have to take a pay cut if he wants to join Real Madrid. The Daily Mail reports that the 26-year-old midfielder is considering a summer move to the Bernabeu, but would have to be prepared to earn less than his United wage of £290,000 a week.

United team-mate Juan Mata could also be looking at a reduced pay packet as Barcelona weigh up a move for the midfielder, The Sun says. The LaLiga champions are among the clubs interested in the 31-year-old – with Mata also keen on the move – but would offer less than Mata’s £170,000-a-week earnings at United, the paper says.

Arsenal could make a shock bid for Chelsea’s Kurt Zouma this summer, The Sun claims. Unai Emery is said to be keen on the defender, who has impressed during a loan stint with Everton, as he looks to sign a world-class centre-back to solve the club’s defensive troubles.

Meanwhile, Manchester United are reported to have stepped up their pursuit of Portuguese pair Joao Felix and Bruno Fernandes. The Evening Standard says the duo, who play for Benfica and Sporting Lisbon respectively, are among Ole Gunnar Solskjaer’s top targets and that United have been looking at the possibility of bringing them to Old Trafford with a combined fee of £150million.

Barcelona were 'one step away' from signing Liverpool star before Anfield move https://t.co/0kiULvYJm6pic.twitter.com/qw8RoITSDr— Mirror Football (@MirrorFootball) May 1, 2019

Axel Tuanzebe: Manchester United are prepared to give the 21-year-old a chance to prove he can break into the first team this summer, the Daily Mail reports. The centre-back has impressed while on loan at Aston Villa and United staff have recommended Solskjaer takes a closer look at the youngster, the paper adds.

Andre Gray: Steven Gerrard is reportedly keen to sign the Watford striker on loan. The Mirror says Gerrard believes the 27-year-old is the right man to help lead his attack ahead of next season’s title challenge.