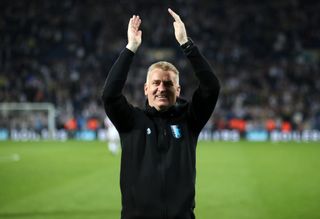 Dean Smith insists he is ready to complete his “impossible dream” and guide Aston Villa to the Premier League.

The 48-year-old is on the brink of the top flight ahead of Monday’s Sky Bet Championship play-off final with Derby.

Smith started his managerial career as caretaker boss at Walsall in January 2011 when the Saddlers were bottom of League One, eight points from safety.

After saving them from relegation, he eventually turned them into play-off contenders during almost five years in charge.

His move to Brentford at the end of 2015 gave him a chance in the Championship and Smith, who joined Villa in October, knows he is now close to reaching the top.

“It’s certainly not improbable or impossible to get to the Premier League with Aston Villa. There’s a distinct possibility.

All of us this time tomorrow. 🙏#AVFCpic.twitter.com/RRJmleOXGF— Aston Villa (@AVFCOfficial) May 26, 2019

“We should be a top-six team in the Championship guaranteed in my eyes, with the size of the club and the players we’ve got, and we should always be trying to get to the Premier League if not in it.

“Getting Aston Villa up would be a big achievement but probably keeping Walsall up in my first year was a bigger achievement because we needed snookers in January.

“That was certainly a tough time. Each job you have has its own tough times and good times.

“At the moment we’re in the period of a good time and we need to make sure we finish that off by getting promoted.

“If we do it will certainly feel like the pinnacle of my managerial career so far.”

Monday’s £170million showdown will be the 443rd game in management for Smith, who believes he has paid his dues in the lower leagues.

He said: “I think I’ve had to. You have to as a young manager. If you want to have a career managing you’ve got to work your way up.

“That’s why I take my hat off to John Terry being here, working with myself and Richard (O’Kelly) and Neil Cutler.

“It’s been refreshing and brilliant to have him working with us.

“But you have to work your way up and I’ve enjoyed every minute of it.

“There have been highs and lows but that’s what’s made me the manager I am today, learning from those experiences whether they be good or bad.”