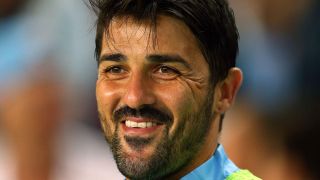 Veteran striker David Villa is set for a reunion with former Barcelona and Spain team-mate Andres Iniesta at Vissel Kobe.

After New York City confirmed Villa, 36, would leave the club upon the expiration of his contract, the 2010 World Cup winner made the announcement via social media that he will be moving to the J.League.

Iniesta left Barca for Vissel Kobe in May, and the pair are poised to join forces again after starring together at Camp Nou from 2010 to 2013, as well as for Spain's national team.

"In my years as a professional footballer, I have had to make many important decisions. For an athlete, the ones made off the field are the hardest, and I find myself in another one of those moments now," Villa said.

"Throughout my career, I have always listened to my body, people around me, and my instinct most of all.

"In those moments of doubt, I hope that a sign, a detail or something gives me clarity. A new challenge awaits, Asia."

During his time in the MLS, Villa scored 80 goals in 126 appearances and earned a recall to the Spanish national team in 2017 – three years after his previous appearance for La Roja.