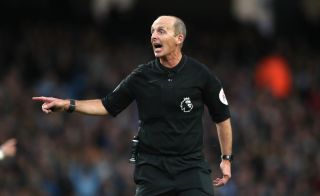 While some managers may curse when they see Mike Dean arrive at their games, the feeling is quite different for Tranmere boss Micky Mellon.

That is because to Mellon, the Wirral referee is not the most prolific issuer of red cards in the English game, but a passionate fan.

Indeed, the most memorable images of Rovers’ Sky Bet League Two play-off semi-final triumph over Forest Green last week were not of the team’s celebrations or of their 32-goal star man James Norwood, but of Dean.

Easily spotted on a crush barrier, the Premier League’s most recognisable referee led the Tranmere partying from the terraces as Mellon’s men booked a Wembley date with Newport thanks to a 1-1 draw at the New Lawn.

In pictures that made their way around the world, Dean – who this season became the first man to send off 100 players in the Premier League – was seen singing and punching the air in jubilation over the success of his boyhood club.

Fans might often joke about the allegiances of referees, but Dean’s were certainly in no doubt here.

Mellon said: “Football being what it is, we all like to speak about referees. Referees are ‘this’ or ‘that’.

“But we don’t see Mike as a referee because he doesn’t ref us. He has a season ticket, so does his daughter, and they follow us up and down the country.

“There is a lot of negativity sometimes when you see things like what happened at the end of the Forest Green game, but I looked at that and thought, ‘Isn’t that good?’

“Isn’t it good that a game of football can do that to somebody? I knew that he meant it because I know how long he has supported Tranmere.

“A huge part of the football world watching that was going to have an opinion, but he didn’t care. That is how he felt. He was going to show that and I thought it was brilliant.”

Tranmere will return to League One for the first time since 2014 if they beat Newport at the national stadium on Saturday.

Obviously as a Tranmere fan, Dean could never be in consideration to take charge. Instead, cameras will doubtless be scouring the crowd to pick him out.

Mellon hopes he has plenty more reason to stand out.

“Unfortunately he’s not reffing it!” said Mellon. “But why not enjoy seeing somebody getting excited about a game of football? Because if you are not enjoying it like that, why are you doing it?

“Every credit to him and let’s hope he’s doing it again on Saturday night!”