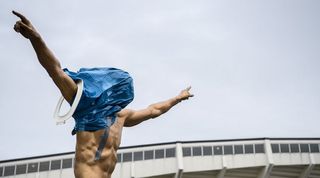 It was announced on Wednesday that the former Manchester United striker has bought a 25 per cent stake in the Allsvenskan club.

The news went down badly with supporters of Ibrahimovic’s first club Malmo, who had unveiled a bronze statue of the player outside their stadium just over a month ago.

Fans were furious at his involvement in a rival club and vandalised the 3.5 metre-high statue as well as spraying it with paint, while video footage posted online shows it being set on fire.

Pictures show that ‘Judas’ was written across the door of the property in spray paint, prompting a police investigation.

Ibrahimovic left LA Galaxy at the end of the MLS season and is yet to sign with a new club.

The 38-year-old invested in sports and live entertainment company AEG, which owns LA Galaxy and has a minority stake in Hammarby, by taking a 50 per cent stake in AEG Sweden.

"Hammarby is a great club, with passionate supporters and a respected history in Stockholm and throughout Sweden," he said.

"I am excited for the opportunity to continue my relationship with AEG while supporting one of the most interesting and influential clubs in Sweden."

QUIZ! Can you name the top 32 all-time English goalscorers in the Champions League?