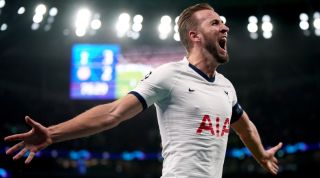 We're only counting goalscorers since the Champions League launched in 1992/93 - so European Cup heroes are out of the running. There's nine minutes to name all 32 players, and then we'd like to see how you did, so tweet a screenshot of your score (with no answers) to @FourFourTwo.

ANOTHER QUIZ Can you name the 50 most valuable players in the Champions League in 2019/20?

Harry Kane is rapidly rising up the ranks of this particular group and bagged his 20th goal against Olympiakos last night. The England skipper reached that landmark in just 24 games, fewer than any other player.

But it's not just Kane who has excelled on the continent, and you have to name the players that bravely went before him too. You get their club(s) and position. Now good luck remembering Blackburn's back-up striker from 1995/96!