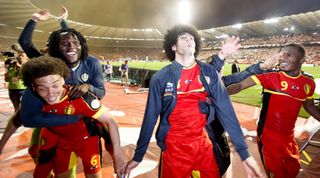 It's that time of year again folks: when England fans get squirmish as montages of Scott Carson's balls-up, heartbroken players trudging off the Wembley turf and Steve McClaren's umbrella fill our TV screens. Get over it, that's so 2007.

Instead, feast your eyes on our rundown of the weekend's biggest World Cup qualifiers, featuring nervous Nigels, surprise packages... and yes, England.

Welcome to the most open group of European World Cup qualifying.

Top spot in Europe's Group B has already been sewn up by dominant Italy, but there’s still an all-important play-off spot up for grabs, and the race starts with this potential firecracker on Friday afternoon.

Improving Armenia might be fifth out of six with two games to play, but the Eurasians could move within a point of second place with victory in Yerevan.

If Denmark lose out to Italy and the Czech Republic see off Malta (likely), then the last round of games would kick off with just one point separating four teams: Bulgaria (13), Denmark (12), Czech Republic (12), Armenia (12).

Armenia had best not get too far ahead of themselves, with a daunting trip to Naples still to come, but there’s enough quality in this side to upset the odds.

Forget that a nationwide goalkeeper shortage means they’re still relying on 39-year-old Roman Berezovsky between the sticks. With the likes of Borussia Dortmund star Henrikh Mkhitaryan in their ranks, anything is possible yet.

With a play-off spot already in the bag for Croatia, there’s nothing on the agenda for Igor Stimac’s men other than a gung-ho goal-getting crusade against Belgium in Zagreb. Only a win can delay the latter’s qualification for their first major tournament since 2002.

The Belgians have dropped just two points over their entire qualifying campaign – in last year’s 1-1 draw against the Croats. So there’s a chance yet, but any hopes also rely on Wales beating Marc Wilmots’ men in their final game.

Err, never mind then. Still, Stimac’s side can spoil the celebrations for a few days at least. They’ve only lost one of their eight games this campaign (at home to Scotland, annoyingly for them), so don’t rule them out just yet.

This is currently the tightest European group where top spot is still available. In the first game, Euro 2012 hosts Ukraine and Poland know they could knacker each other with a draw (should England beat Montenegro). So really, Poland, already three points behind Roy Hodgson’s Three Lions, need to win to have any chance of going all Croatia on us and making England fans cry again at Wembley on Tuesday. Ukraine could top the group with victory, meanwhile.

England and Montenegro will already know the result of this game by half time, which could certainly affect Hodgson's second-half strategy. For Hodgson’s men it’s simple: if they win this utterly winnable home game and Ukraine don’t do the same in Kharkov, they’re in Brazil. Easy, right?

On paper it sounds as exciting as a sloth-led snooze fest but this one is hugely important for the home side, who can take one step closer to an all-important play-off victory in Reykjavik.

Switzerland need just a draw against Albania in their final game to seal top spot, but second place is still wide open with only two points separating Iceland, Slovenia and fourth-placed Norway.

Iceland have never qualified for a major tournament but could go a long way to ending that unwanted record against bottom side Cyprus. Their Mediterranean visitors have won only one game in eight – but that happened to be a 1-0 win over Iceland in September 2012’s Larnaca tussle. Bah.

Since then, however, Lars Lagerbäck’s men have barely put a foot wrong, beating Albania (twice) and Slovenia, as well as picking up a point in an entertaining 4-4 draw against group-leading Switzerland.

Should Slovenia and Norway draw in Maribor, victory for the Scandinavians would all but confirm their place in the play-offs. That scenario would leave Slovenia three points and at least two goals down with a daunting trip to Berne coming up last.

It’s Israel’s last throw of the dice to make only their second-ever World Cup.

Portugal, meanwhile, must win to keep up with Russia, who will almost certainly beat Luxembourg. If Cristiano Ronaldo & Co don't bag all three points they're in the play-offs at best.

Three points for Israel would still leave them one behind Portugal in third, with their final game against Northern Ireland in Ramat Gan.

They’d still be relying on Portugal not to beat Luxembourg, though – and that’s just not going to happen. With Russia facing off against Azerbaijan in their final match, it’s looking like the play-offs once again for England’s two-time penalty nemeses.

Two teams locked on level points playing for South America’s last automatic berth, with one game remaining after this.

With a play-off spot virtually confirmed regardless of this result, in all likelihood the winner simply avoids having to go all the way to play Jordan in a winner-takes-all showdown.

Ecuador will be playing in memory of former striker Christian Benitez, who died from a cardiac arrest in July. Having already retired their star man’s No.11 shirt, La Tri will hope to pay another tribute  by winning in Quito.

Visitors Uruguay have recovered from a winless run of six games to take maximum points in their last three. With Luis Suarez and Edinson Cavani leading the line they’ll be expected to get the job done.

Nobody is expecting Venezuela to bag the play-off spot, but it’ll be fun watching them try.

The only way La Vinotinto can qualify is by winning their final game and hoping Uruguay lose their last two, but they’ll also need to smash bottom side Paraguay to reverse the current six-goal swing.

Thankfully for them their opponents have been completely hopeless this qualifying campaign, conceding an average of two goals per game in their dismal efforts. Attack, attack, attack!

This one’s about as simple as it gets – the winner takes a three-point advantage into their final game against a side that have already qualified.

Both of these sides can still make it through automatically this year, but Honduras' three-point advantage and superior goal difference (they also play Jamaica in their final game) means a play-off against New Zealand is most likely on the line.

Mexico will hope their home advantage pays off but if they’re to make it to Brazil it’ll be in the most unconvincing way possible.

Víctor Manuel Vucetich’s side have netted just four times in eight games, but with Javier Hernandez and Gio dos Santos roaming in attack they’ll be looking for a swift upturn in fortunes here.

These two sides 'boast' an equally poor goal difference, and it could still yet go down to the wire with a draw. Mexico travel to Costa Rica in their final game, while Panama host leaders United States.

The first of a two-legged play-off to determine who takes their place in Brazil.

Having helped knock out South Africa in the group stage there is little doubting Ethiopia’s credentials, but they’re going to have to pull off some shock to get through against the mighty Super Eagles.

Their squad of 20-somethings (all but four of whom ply their trade domestically) made a first Africa Cup of Nations appearance for over 30 years in January, but finished bottom of their group after losing two and drawing one of their three games.

One of those two defeats came against Nigeria – but only thanks to Victor Moses’ late brace of penalties.

The result points only one way on paper, but you write these plucky party poopers off at your peril.