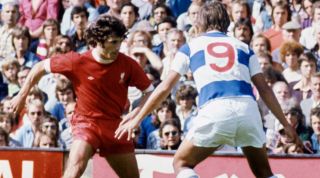 After a poor start, Harry Redknapp’s future as QPR manager will once again be under the microscope this weekend – so Hoops fans of a certain vintage could be forgiven for getting misty-eyed over the club’s past as Liverpool arrive in the capital on Sunday lunchtime.

On the evening of April 24, 1976, QPR sat one point clear of the Reds after beating Leeds United 2-0 in their final match of the season.

What followed would never happen in the modern era; firstly because QPR are exceptionally unlikely to find themselves in a title shake-up again, and secondly because Liverpool didn’t end their rivals' title dreams until 10 days after the Londoners' season had finished.

The reason for the delay? The inexplicable scheduling of the first leg of a two-legged UEFA Cup final between Bob Paisley’s side and Club Brugge (which Liverpool went on to win 4-3 on aggregate).

Nervy at the top

For those 10 glorious days, QPR could claim to be the country’s de facto League champions, and few would have begrudged them the honour.

Dave Sexton’s side went unbeaten at home throughout the season, playing the kind of football that had the purists purring. But with the season over they could do nothing but sit on their backsides and wait for Liverpool to get their European business out of the way.

“If we had won it we could have all gone away on a little holiday with wives, girlfriends, families,” John Hollins, future Chelsea manager and a crucial member of that QPR side, tells FFT.

“We would have gone to Spain as that was pretty much the only place you could go at the time, but it would have been great. As it was, we didn’t even get together for the Liverpool game that eventually decided our fate – some of us were at home, some were down the pub. I don’t even think it was on TV. I listened to it on the radio.”

Some, like Hollins' team-mate, Don Masson, were even further away.

“The Scotland squad went to Ibrox to watch Rangers against Dundee United, who had to win to stave off relegation,” says Masson. “Everyone kept updating me, telling me that Wolves were winning 1-0 and that we were going to be champions.

“Unfortunately (Kevin) Keegan and (John) Toshack scored and ruined it all. I was fortunate because some of the lads were in the television studios watching the game (a highlights show screened the action from Molineux later that evening) so at least I was away from it all.”

That QPR’s eclectic, at times mesmeric, squad were all in it together on the pitch wasn’t in doubt.

From Phil Parkes in goal – “he saved us 15 or 20 points that season,” says Hollins – through to Frank McLintock and David Webb, the only non-international in the club’s regular starting line-up, the maverick genius of Stan Bowles and the trickery of Dave Thomas on the wing, Sexton’s side played a brand of football that was out of keeping with the dour nature of English football in the 1970s.

They had already beaten Liverpool on the opening day in August – a 2-0 win which featured Gerry Francis scoring the eventual goal of the season – and demolished then-league champions Derby County 5-1 at the Baseball Ground.

“Some of the football we played that season was incredible,” says Masson. “I think most people would have told you that we deserved to win the league that year. Even Liverpool’s players would have admitted that QPR were the best team that season.

“I remember going to Derby and beating them easily, when Stan Bowles got a hat-trick. We used to attack wherever we played because we had the players to do that.”

What Redknapp wouldn’t do to have a Bowles equivalent roaming at Loftus Road this weekend.

“Stan was great that season,” says Hollins. “Teams set out to kick him and intimidate him everywhere we went but most of them couldn’t get near him. If they did whack him he would just get up and carry on.”

The presence of Bowles, alongside McLintock – a double winner with Arsenal in 1971 – ensured that life was never dull on or off the pitch. So what were the nights out like? “Lively,” laughs Masson. “Let’s just leave it at that.”

Little surprise then, that when their season finally ended with that 2-0 win against Leeds, the Daily Mirror reported that the bubbly was flowing at Loftus Road. The tabloid’s headline, though, warned that this was only the start of Rangers’ “Torture”.

Juxtaposed, ominously, alongside a picture of Southampton Ladies beating QPR 2-1 in the Mitre Cup, the Mirror’s Harry Miller described the scene in the press room after Sexton’s men had beaten the Yorkshire side in west London.

“Jimmy Armfield, his voice calm and detached, injected the necessary realism into a day when it was hard to believe that Rangers had not already been crowned champions,” he wrote. “Champagne corks were still popping in the home dressing room as Leeds boss Armfield talked about the night of May 4 that will decide the most fascinating finish ever to a First Division season.”

Even now, almost 40 years on, Hollins says that the mood in the dressing room reflected the fact that QPR knew their fate was out of their hands.

“We'd had such an amazing season, but even talking about it now makes me angry,” he says. “Even now I’ll go over it in my head and think about Norwich at Carrow Road two games before the end. Two of their goals were offside, and if they hadn’t been given them we would have been champions. We deserved to be champions.”

QPR fan Phil Tarrant, now 59, was in East Anglia on that afternoon and says the result of that match still rankles.

“We should have won it, no doubt about it. We completely dominated but somehow contrived to lose the game 3-2,” he says. “If we'd have won that it would still have been in our hands. We wouldn’t have been waiting 10 days to find out if we were going to win the league.”

As it was, when May 4 rolled around, Hollins, like Tarrant and thousands of others, were glued to the radio.

“Wolves went 1-0 up and I kept turning the radio off and then going back to it,” he says. “There was 30 minutes to go, then 20 minutes to go and you’re saying to yourself ‘hang on, we’re going to do this’.

“Then Liverpool equalised (through a Kevin Keegan goal) with 15 minutes remaining. It was the deadest feeling I’ve ever experienced. They ended up winning 3-1 and that was that.”

As far as kicks in the guts go, it was the most painful blow imaginable.

“It was awful. Terrible,” says Tarrant. “But the funny thing is, the overriding emotion for most of the fans was pride that we had got so close. We didn’t know that football would change and we would never have another chance to do it. Back then teams like QPR and Ipswich had a chance of winning the title. It could never happen now.

“We just loved watching that team. We would walk into Loftus Road knowing that we were going to be entertained by a fantastic bunch of players.”

What the modern-day QPR fan wouldn't give to experience that feeling.