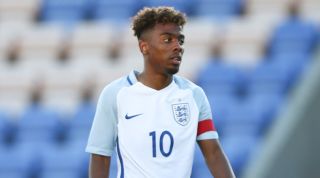 Torres has quickly climbed the charts with Atlas, making his Liga MX debut during the 2016 Apertura at the age of 16. The explosive wide attacker has mostly set up shop in the Liga MX Under-20 competition, where he’s a constant menace for opposing defences.

Torres is capable of playing on either flank and pulls the opposition apart with his runs in behind, breaking down defenders with or without the ball. Having been named the Golden Ball winner at the CONCACAF qualifying event in 2017, a star turn in India is sure to keep the spotlight on the Guadalajara native.

The trip to India is a return to the scene of a 2016 triumph for Dawood and the Iraqi U17s – the talismanic attacker helped his side lift the AFC U16 trophy there last summer. Dawood hit the winning penalty against Iran to seal the title, was named the competition’s Most Valuable Player and finishing as its top scorer.

Capable of scoring in a variety of ways, Dawood was unstoppable up front against AFC competition. An even bigger task awaits him in India this time around, as he’ll look to crack the Group F backlines of England, Chile and Mexico. Scouts will surely be watching the Al-Naft forward closely.

Japan’s ability to produce and develop technically gifted attacking players shows no signs of waning. Not only is Kubo one of the latest, he could end up eclipsing the accomplishments of some of his compatriots.

Currently on the books at FC Tokyo, Kubo made his J-League debut earlier this season, and also competed at the U20 World Cup in South Korea. Aged only 16, Kubo was previously on the books at Barcelona – part of the overseas academy contingent that drew the ire of FIFA in 2015 and forced him to return to his homeland.

Kubo has continued to refine his attacking skill since then, as a diminutive force capable of beating players off the dribble or scoring goals on his own. Even if he’s slightly younger than some of his opponents, he is surely poised to dazzle in India.

Even with the availability of team-mate Jadon Sancho up in the air – his new club Borussia Dortmund are seeking to keep Sancho in Germany for the U17 World Cup, with the latest reports suggesting that he will only be released for the tournament’s group stage  – England have an impressive group heading to India. Among them is Gomes, a Manchester United academy player who made his Premier League debut on the final day of last season (and with that, becoming the league's first Year 2000-born player).

The classic No.10 is an impressive player for his age, boasting a flashy passing range, high-level understanding of the game and ability to open things up with delicate dribbling. He wasn’t part of England’s U17 UEFA Championship squad due to injury suffered before the competition, and can make up for lost time at the World Cup.

There’s little not to love about a Barcelona-bred defender who has caught the eye of Pep Guardiola. Like other players on the list, Garcia made headlines over the summer when he made a move of his own, swapping La Masia and Barcelona for Manchester City. Adding intrigue to the entire saga is that Garcia’s agent happens to be Barça legend Carles Puyol.

Born in 2001, Garcia is one of the youngest players at the competition, and will certainly be the focus of City fans keen to check in on one of their many academy starlets. The centre-back has earned comparisons with Puyol himself, and Garcia’s comfort on the ball stands out. He’ll have to play his way onto the field for a talented Spain side, though if he gets the chance, his quality will be easy to spot.

The Hamburg product is yet to make a Bundesliga appearance, though his prodigious scoring rate and fox-in-the-box ability makes him a strong contender to finish as the World Cup’s top scorer. Arp was linked with a move to Chelsea earlier this year before renewing his contract with Hamburg, an indication of the attention he has already drawn to himself.

His star turn came earlier this year at the UEFA U17 Championship, when he scored seven goals – including two hat-tricks in the group stage. A classic poacher who can finish everything in and around the box, Arp has a trick or two up his sleeve; he's excellent playing off his team-mates, and packs a decent shot from distance. If Germany are to perform to expectations in India, they will need a big performance from their No.9.

Pipping Arp as the top scorer at this year’s UEFA U17 Championship, Gouiri is another player nudging out of the ridiculous pipeline of talent France is churning out. The Lyon striker is an excellent finisher, and can also create off the dribble for either himself or his team-mates.

Gouiri has quick feet and is built well enough to match up physically with opposing centre-backs. He scored seven goals in three group games at qualifying, and matchups against New Caledonia, Japan and Honduras are certain to lead to more goals for the forward.

A left-footed attacking midfielder from Envigado, Meneses elicits the comparisons of compatriot James Rodriguez because of his background and playing style similarities. Meneses now has a World Cup platform of his own to shine on, starting with a group that includes host nation India, Ghana and the United States.

Meneses is an interesting case, since he’s played his way into the Colombian side in the wake of the South American U17 Championship. While it’s always unfair to compare teenagers to much-accomplished counterparts, the graceful midfielder will soon have a chance to prove just how well he matches up to his elder counterpart.

A force to be reckoned with at any World Cup, Ghana arrive in India with another impressive squad of rising stars. One of those who has emerged at this point is Mohammed, an exciting attacking player who has been linked to a handful of prominent European clubs.

His current club, Wafa SC of Ghana, earlier this month denied that he has already been sold to Manchester City. Whether a move has been lined up or not, Aminu’s chance to compete at this World Cup is the perfect one for a talent like him to be spotted.

He’s an impressive blend of speed and technique in the final third and should have a field day against opposing U17 defences.