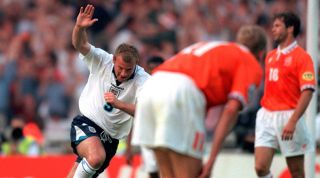 On my full debut, aged 17, I became the youngest player to score a top-flight hat-trick, beating Jimmy Greaves’s record. I didn’t even know I was playing until midday, so there was no time to get nervous, but I could never have dreamed that it would go as well as it did.

My trademark one-arm-in-the-air goal celebration just happened that day, and it stuck until the end of my career. That hat-trick gave me the belief that I could really make it in the game.

We went to Anfield thinking we had to beat Liverpool to secure the Premier League title, so we were under pressure. It wasn’t a great performance or a great result, but it turned out to be a great day.

We found out that Manchester United had drawn 1-1 at West Ham with about 30 seconds left in our match; we could tell from the Blackburn supporters’ reactions that United hadn’t won and the title was ours. It's not true that I celebrated by creosoting a fence, though – that was my father-in-law who did that!

The atmosphere at Wembley that night was probably one of the best that I ever played in, certainly in an England shirt. It was just a perfect performance; the most complete display I was ever involved in during my England career.

To beat that Dutch team 4-1 was great, with two goals for me and two for Teddy Sheringham. Our third goal was some move, from Gazza to Teddy, who slipped the ball to me to hit as I hard as I could, and it went into the top corner. It was a great team goal.

This was my first game as England captain. Glenn Hoddle said I was going to have the armband for a three-game trial period because he didn’t want the extra pressure to take away from my goalscoring duties.

We won the game and I managed to score, so I was hopeful then that I would get it on a permanent basis... which I did. I'd always dreamed of playing for England but I never thought I’d captain my country. It was probably the biggest and best thing to happen to me in football.

The day I broke Jackie Milburn’s goalscoring record. It had stood for so many years and Jackie was my dad’s hero, so I knew what he meant to the people of Newcastle. They’re my club, so to break the record at the Gallowgate End was a special feeling.

I remember just standing there with my arms aloft for 10 or 15 seconds after the ball went in – the feeling sent a shiver down my spine. It felt so good that I just wanted to stand there forever.

This feature originally appeared in the July 2016 issue of FourFourTwo. Subscribe!