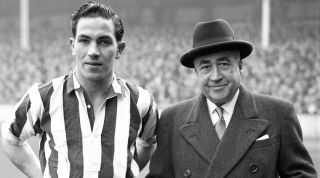 For Newcastle fans of a certain vintage, Alexis Sanchez's Arsenal arrival may bring back memories of Chilean compatriots who blazed that trail many moons ago.

Like Sanchez, the Robledo brothers, George and Ted, provided a dash of exoticism; it was much needed in a post-War English league which was anything but cosmopolitan and dashing.

In austere times, with the country still desperately attempting to rebuild after its hammering from the skies by the German Luftwaffe, the football on offer at grounds up and down the country offered a welcome release – but little in the way of aesthetic beauty.

“Within Britain the game had sharply declined as a spectacle,” wrote Brian Glanville in Soccer Nemesis, published in 1955.  “Long, hard kicking and vigorous individual bursts had succeeded the classic forward play practised before the war by Aston Villa and Newcastle United.”

Imagine the buzz, then, when two young Chileans began making waves in the Football League.

The Robledo brothers were born in the town of Iquique in the north of Chile, to a Chilean father – the chief accountant of a mining company – and a mother from the South Yorkshire village of West Melton.

Elsie Oliver had travelled to South America shortly after the end of hostilities in the First World War, and was working as governess to the children of an English mine manager when she met and subsequently married Aristides Robledo.

In 1932, with the global economy at large and the mining industry in particular at a low ebb, she headed home with three children – five-year-old George, three-year-old Ted and a new-born by the name of Walter. All three would settle at local schools and all three would show the kind of ability with a ball that made local clubs sit up and take notice.

With a shock of dark black hair, eldest Robledo brother George was most eye-catching of the lot. After playing for both Huddersfield and Barnsley during the War, Robledo signed professionally with the latter aged just 16 in 1943.

On the opening day of the Football League season in 1946/47 – the first in seven years – George scored a hat-trick for Barnsley as they thrashed Nottingham Forest 3-0.

In a 1999 interview with The Independent, former team-mate Johnny Steele declared that Robledo was destined to play at a higher level. “There wasn’t a lot of fancy stuff in his play, but he was good in the air and he was an effective finisher,” said the Glaswegian. “He was a natural sportsman, and he worked hard to become a good player. He was a great fellow, a hell of a nice person.”

It was therefore surprising that it took almost three years before a club from the First Division was willing to take a punt on his talents.

One of the conditions of George signing for the club was that they would also take his brother. But although Ted would struggle to make his mark at St James’ Park – hardly a shock, given he had only made five appearances during his time at Barnsley – his sibling was about to embark on a career that would earn him legendary status in the North East.

Agog on the Tyne

George would make 164 appearances in the famous black and white, scoring 91 goals in a partnership with Jackie Milburn still talked about in the city today.

The pair’s crowning glories would come in back-to-back FA Cup finals, against Stanley Matthew’s Blackpool in 1951 and Arsenal the following year.

“Newcastle would now seem to hold a slight advantage at inside-forward in the clever dribbling of Taylor and the strength of Robledo,” wrote The Times on the eve of the 1951 final.

And although Milburn, typically, stole the headlines with a brace in the Geordies' 2-0 win, Robledo set up the first with “a quick long answering pass”, to further entrench his position as a Tyneside favourite.

The second final was spoiled as a spectacle after Arsenal’s Walley Barnes was taken off injured on 35 minutes. But on 84 minutes, it was the half-Chilean with a Yorkshire accent who sealed Newcastle’s second successive Cup triumph. “With but six minutes left, Mitchell, the one man who looked as though he could win the match for United, crossed for George Robledo to head a tame winning goal off the post,” wrote Bob Ferrier in the Daily Mirror.

Robledo – or ‘Pancho’ as he was inevitably christened by his team-mates – had written his name into Newcastle folklore, and they were taking note back home in Santiago.

George had already been included in the Chile squad for the 1950 World Cup, playing in a 2-0 win for the South Americans against Walter Winterbottom’s England at the Maracana. He even returned to St James’ Park carrying pairs of lightweight rubber boots, worn by his countrymen in the tournament in Brazil, but apparently derided by English footballers who favoured heavier, army-like footwear for the trench warfare of English winter quagmires.

Where the heart is

When he returned to Chile at the end of the following season, though, he didn’t go to pick up another consignment of boots but with Ted to join Colo Colo – the country’s premier team, and the club with whom Alexis Sanchez, over 60 years later, would win his first trophy.

“They were offered much more money than they’d been getting under the maximum wage at Newcastle,” said younger brother Walter in 1999. “Our fares were paid, we were given a very nice club house, and there were good bonuses.”

The brothers would go on to win two domestic titles in the country they once again began calling home as George became ‘Jorge’ and plain old Ted became ‘Eduardo’.

The eldest Robledo did, though, keep his links with the game in this country, acting as a liaison for England's World Cup squad in the 1962 tournament in Chile while also working as a sports master at an English school in Vina del Mar.

George and Ted would remain the only South Americans to play in an FA Cup final until Ricky Villa and Ossie Ardiles matched their achievement in 1981 – eight years before George passed away at his home at the age of 63. Ted, meanwhile, had died in mysterious and tragic circumstances on a boat leaving Dubai harbour in 1970. The captain of the boat was charged with his murder and acquitted. His body was never found.

Now, over 60 years since the Robledo boys added a dash of colour to the moribund world of post-war football, the baton has passed to Sanchez. And if half a century from now he’s remembered as fondly in north London as the Robledo brothers still are on Tyneside, Arsene Wenger will have a pulled a masterstroke – if a far more expensive one than Newcastle pulled all those years ago.