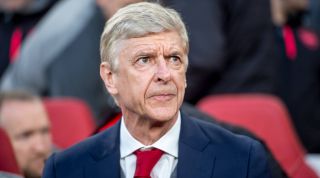 Frank Sinatra’s My Way is the song everyone wants played at their funeral, but in most cases it’s delusional nonsense – almost all of us live a life of compromises, concessions and cop-outs. For Arsene Wenger, though, it would be pretty much spot on – although in his case, the song’s tone would be noble tragedy rather than jazzy triumph.

To get the clearest picture of what Wenger came to represent within English football, it’s useful to compare him with his two biggest rivals. While Alex Ferguson was committed to nothing other than winning - cycling through assistants, transfer policies and playing styles according to the demands of the day - Wenger was equally intent on upholding his values, whatever the effect on his medal collection.

Whether by choice or circumstance, Wenger, in his later years at least, was the closest thing the Premier League had to a moral compass. And there should be no overstating how welcome that was, nor what a loss it will be. In a sport increasingly rife with Gordon Gekko figures, Wenger never stopped preaching that greed is bad.

“It's a satisfaction for a club to live within its natural resources,” he said in 2009, inadvertently (or maybe not) evoking the oil and gas riches that had tilted football’s playing field beyond recognition. “If you don’t balance the books, you go bankrupt and die.”

It wasn’t the sort of soundbite that’ll find its way onto Sky’s pre-match montages but it was a welcome antidote, in the era of Mino Raiola and Jim White, to football’s fetishisation of spending.

Wenger’s claiming the moral high ground was, of course, in part because the moral victory became the only triumph available. The Frenchman (and his board) made the pivotal decision of his career – the decision to move stadium – in a world unwarped by petrodollars, and by the time it bore fruit, such produce was desperately inadequate. Matchday gate receipts were suddenly pocket change next to football’s new money.

So Wenger, unable to compete with the super-rich, cast himself as the bastion of financial ethics; a lone voice of economic vigilance (and often to the point of self-parody). In that regard, his role as the Premier League’s moral gatekeeper came more by accident than design: to save face, he saved money. He preached what he’d been forced to practise.

Yet that doesn’t change the fact that the values he stood up for were absolutely the right ones. For proof of that, we only needed to look at what was happening in the world outside of football. Two weeks after Sheikh Mansour completed his takeover of Manchester City in 2008, to cement Arsenal’s secondary status and truly rubberstamp the sport’s megabucks era, Gordon Brown gave the green light to a £50bn bailout of Britain’s banks.

If there’s one thing to be learned from the brutal austerity politics of the ensuing decade, it’s that reckless spending by those entrusted with money isn’t just vulgar, it’s vicious. Wenger could not have chosen a better moment in history to push the idea that financial practices have an inherent moral dimension.

If his complaints over other clubs’ “financial doping” could stray into sanctimony, they were nonetheless a rare instance of sober thinking in a sport drunk on money, and whose connection to real life became more tenuous with each passing year. “It's an inflationary trend in a deflationary world,” he said of the transfer market when Manchester Cityweretrying to buy Kaka for £100m. “We live in the real world. City are in a different world... at the moment, England loses 3,000 jobs every day.”

No one enjoyed job security quite like Wenger, of course – although it’s debatable how much of a blessing that really was during those final few years of protest and unrest. But while the Ozil-Sanchez era was on the face of it marked by a move towards big spending, those who read that as Wenger having abandoned his prudent principles should take a look at the £226m in cash reserves his club amassed between 2007 and 2016.

Arsenal’s paying supporters could fairly complain that the team’s creeping mediocrity over that time left them badly short-changed (especially as the man stowing away their money was hardly working for free). North London’s “spend, spend, spend” brigade had a point, however crude.

Opinion: I was ‘Wenger In’ until the end – but thank goodness he’s going, for his sake

Yet the fact that Wenger prized his principles above his club’s success – and indeed his own reputation – only strengthens the idea that this was about more than just Arsenal; that he was making a point to football as a whole. And his absence of trophies, galling as it was for the fans, didn’t hurt his moral standing. No one wants to be preached at by the guy who’s just won everything; just ask Pep Guardiola. The noble loser, on the other hand, carries a certain credibility.

“The moral values I’ve learned in my life I’ve learned through football,” he once said. “We have an educational purpose, to give back to the fans so that they learn moral values from our game and how we behave.”

Whether that purpose was fulfilled or not is a matter for another time, but Wenger is one of the very few managers – perhaps the only one – who could say those words without sounding like some combination of chump and hypocrite. Arsenal will certainly lose something special when the Frenchman leaves, even if it means winning a bit more often. And the Premier League, the land of infinite wealth, will suddenly be a whole lot poorer.