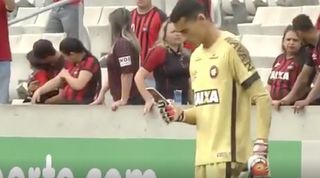 Just before kick-off in the Brazilian Serie A match on Sunday, Santos picked up his phone and attended to what must have been a pretty urgent matter.

The home fans behind his goal at the Arena da Baixada looked on in amazement as the 28-year-old attended to his device, before discarding it as the referee blew for the start of the match.

Post-match, Atletico Paranaense manager Fernando Diniz was just as bemused by the incident as anyone else.

"I don't know," he told Brazilian media post-match. "I think it's strange: Santos is a very responsible player. I thought it was strange, that's what I can say."

Beitar Jerusalem plan to rename themselves as Beitar Trump Jerusalem