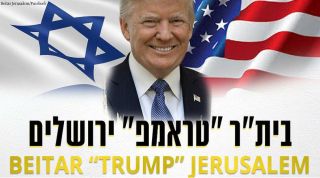 The statement on Beitar Jerusalem's Facebook page dropped the day before the official opening of the new US embassy in Jerusalem's Anona neighbourhood.

The embassy is being moved to Jerusalem from Tel Aviv to recognise the city as Israel's capital, a Trump decision which angered Palestinians and Muslims worldwide.

Famously, Beitar have never signed an Arab player and their fans have an ugly history of racism and related violence.

"Beitar Jerusalem, one of the most prominent symbols of the city, are happy to honour the president for his love and support with a gesture of our own," said Beitar, who are second in the Israeli Premier League and have won six league titles in their history.

"The chairmen of the club, the owner Eli Tabib and the executive manager Eli Ohana have decided to add to the club’s title, the name of the American President who made history, and from now on will be called Beitar Trump Jerusalem.

"For 70 years has Jerusalem been awaiting international recognition, until President Donald Trump, in a courageous move, recognised Jerusalem as the eternal capital of Israel.

"President Trump has shown courage, and true love of the Israeli people and their capital, and these days other countries are following his lead in giving Jerusalem its rightful status."