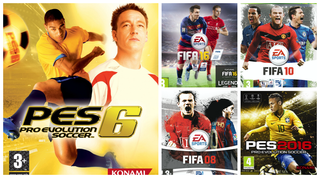 2016 marks the 20th anniversary of gaming’s greatest sporting rivalry. In a realm where we were once spoilt for choice – Sensi, Actua, FIFA, PES and more – now only two football games enter the conversation regarding which to buy at the outset of any given season.

Here, then, we revisit the nine key games – four FIFA, five PES – which saw all rivals eliminated, and sparked a fiery feud that shows few signs of being extinguished.

Electronic Arts’ debut footballing foray, after previously focusing solely on American team sports. Before this the only credible football games on console had been viewed from an overhead perspective, such as Super Kick Off. EA’s fresh spin on the sport delivered an isometric vantage point, fully animated player sprites and thunderous 30-yard rocket shots – although one shortcoming was the ease with which you could score from distance. Curiously, despite the company forking out for the official FIFA license, all 48 teams featured fake kits and player names. That oversight wouldn’t last.

Many incorrectly assume International Superstar Soccer is Pro Evo’s grandaddy. In fact, the former was always developed by Konami’s Osaka studio, whereas PES is a Konami Tokyo game. PS1’s Goal Storm was the latter studio’s first football effort, featuring only international teams and fairly crude ball-stuck-to-feet action. Yet such failings were a blessing in disguise. They inspired Konami to place a bright young talent named Shingo ‘Seabass’ Takatsuka in charge of follow-up ISS Pro – and he would single-handedly remould the entire footballing genre over the ensuing decade.

By now EA’s finances had stretched to licences for real teams, leagues and player names – and John Motson on commentary – setting the tone for the next two decades. This was its first outing on PlayStation (in addition to last-gen machines such as SNES and Mega Drive), and remains notable for its fabulous-on-every-format indoor football mode. It would subsequently, and sadly, disappear, with FIFA Street the closest thing to a comeback for this much-loved feature. With that spin-off series now on indefinite hiatus, we’d love to see six-on-six make a 20th anniversary comeback in FIFA 17.

The PS1 game which saw critics deserting FIFA and signing over their futures to Seabass’ virtual revolution. On the pitch it played phenomenally, with every footballing fundamental now possible using a few almost-effortless controller presses, and all from a side-on, TV-style perspective. Off it, it introduced Master League – a sixteen-team competition in which you managed a side made up of fictional players, but could buy real ones with currency earned from victories. If you ever fell in love with the likes of Espinas, Valery, Castello and Ximenes, you owe a significant debt of thanks to this beauty.

By now Konami’s dominance over EA – at least where critics were concerned – was so powerful that it received a free pass for featuring Italian ref Pierluigi Collina on the cover of this PS2 gem, despite him not appearing anywhere in the game. The decision was as bananas as the football was brilliant, with Master League expanded to four divisions and the on–pitch action once more tightly refined. Officials implemented the advantage rule correctly, while in addition to handling like their real-life counterparts players actually ran like them, with the unique gaits of Thierry Henry, David Beckham and Damien Duff all accurately recaptured. PES 3 served as a new high for the genre – and that would be a recurring theme over the next four years.

Our choice for the second-greatest football game ever made (see our list of the best football games ever made here), and Shingo ‘Seabass’ Takatsuka’s finest hour. Pro Evo still couldn’t compete with FIFA on the licences front – Ligue 1 was newly added, but from the Premier League only Manchester United and Arsenal got the crests 'n' kits treatment – yet the gameplay gulf between the pair was so wide, no discerning fan cared. This was total football, its now-customary slick passing, tactile shooting and intelligent AI play complemented by lifelike subtleties such as quick free kicks. PS2 had never had it so good, and for some this remains the last great Pro Evo.

A landmark title, for two big reasons. It was the first fully overseen by new FIFA series producer David Rutter – a devotee of Leicester City and, more significantly, the Pro Evo franchise. His influence meant an emphasis on reality over gimmicks, with revamped ball and player physics showcasing the publisher’s commitment to leaving the series’ pinball-quick arcade stylings behind. Secondly, in December 2008 it saw the arrival – as a free download – of Ultimate Team, a new mode combining match-playing with the best bits of Top Trumps and collecting Panini stickers as a kid. Seven years later, it remains the most-played mode in any sports game, by an immense margin.

With Rutter at the helm, EA had overtaken Konami to the point of FIFA being considered the purists’ football game – unthinkable in the early-noughties. And with innovative features like true 360-degree movement now par for the course, the move to PS4 and Xbox One saw it refocus energies on providing an experience that didn’t only play believably, but looked exactly like a Sunday afternoon Sky broadcast. That meant partnering up with the Premier League in order to scan the majority of every English top-flight squad, and meticulously recreating all its stadia in-game. Hull vs Sunderland at the KC, with 22 authentic-looking players? In. No football game had previously offered such depth.

EA’s current-gen excellence continues this year, hence FIFA’s latest iteration earning fourth place on our chart of the greatest football games ever. But Konami is approaching peak form again too. New PES goes back to the future, leaning heavily – and successfully – on the elements which made it so strong in the PS2 days. Precise passing and intelligent team-mate movement facilitate Barca-style tiki-taka, while the variety of goals – power headers, drilled volleys, deft side-foots and many more – recalls the late night Master League wonder years. PES still has work to do to keep up with FIFA regarding in-season updates (such as transfers), but after some down years its future once more looks tantalising. So long as it shies well away from considering Mark Clattenburg for PES 2017’s cover.