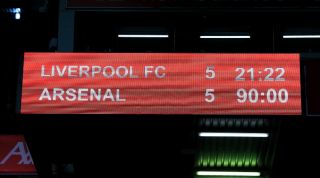 It was a classic mid-60s Anfield experience: Bill Shankly’s championship-winning team entered the fray with She Loves You blaring in the background on the opening day of the 1964/65 campaign.

The whole occasion was given extra spice by the fact that BBC cameras were present and correct to record the first-ever Match of the Day in front of 47,620 at “Beatleville” – as commentator Kenneth Wolstenholme described it. Viewers saw Roger Hunt and Gordon Wallace put the home side 2-0 up, before Joe Baker and Geoff Strong levelled up the scores for Billy Wright’s much-fancied team.

In the dying seconds, an own goal by future Gunners manager Don Howe gave the home side a deserved 3-2 victory, and Shankly’s army made a winning start to defending their title (though they would only finish seventh, some 17 points off Manchester United in the days of two for a win).

REMEMBERED Don Howe: The tactical thinker who helped shape half a century of football

It was hardly a vintage FA Cup final, but the fulsome climax was memorable as Bill Shankly’s Liverpool and Bertie Mee’s Arsenal laboured for 90 minutes in the scorching sun at Wembley.

With extra-time reached, players from both sides writhed around with cramp. But the game sparked into life as Steve Heighway fired Liverpool ahead, before Eddie Kelly poked home Arsenal’s equaliser.

With the match seemingly heading for a replay, an exhausted Charlie George collected John Radford’s pass, and his coruscating 20-yard drive flew past Ray Clemence to secure the league and cup Double for Arsenal, prompting one of Wembley’s most famous celebrations as the long-haired George lay prostrate on his back in a Jesus Christ-like pose. “Charlie George, superstar, walks like a woman and he wears a bra,” Liverpool fans sang at him next time the sides met. Doubt he minded, though.

Liverpool frequently put Arsenal to the sword as they dominated the 1970s, but perhaps the best visual record of Bob Paisley's men's dominance over their north London rivals came in the 1979 Charity Shield at Wembley.

Gunners manager Terry Neill promised Liverpool a “run for their money” after his side had won the FA Cup at Wembley back in May. But a masterful display by the league champions included Terry McDermott hammering his side into the lead, before a driving Alan Hansen run set up fellow Scot Kenny Dalglish for a second.

McDermott provided the final coup de grace, and Liverpool ran out 3-1 winners in the blazing Wembley sunshine. Liverpool went on to retain their title, the Gunners trailing in their wake back in fourth.

It was a classic FA Cup marathon, in the days when replays were de rigeur in the world’s greatest cup competition. Terry Neill’s reigning FA Cup winners and (that season’s) league champions locked horns four times to determine who would play West Ham in the 1980 FA Cup Final at Wembley.

“There was barely a whisker in it,” Neill recalled. The stars of the show were Arsenal’s Alan Sunderland – whose silky runs induced panic into Liverpool’s usually calm backline and earned him a goal in the first two replays – and Dalglish, who appeared to escape his marker at will.

Having beaten Liverpool nine months earlier in the 1987 Littlewoods Cup Final, Arsenal were confident of holding their own against Dalglish’s undefeated side at Anfield. But the Gunners were easily brushed aside by one of the finest teams of the post-war era.

In the first half on Merseyside, Steve McMahon’s magnificent driving run helped set up John Aldridge’s poacher’s finish for the opener.

And after the break, Peter Beardsley’s superb jinking run and chip over goalkeeper John Lukic gave his side a 2-0 advantage over George Graham’s men. The (soon-to-be) league champions could have added several more to their tally, but it was another mesmerising display in front of the swaying Kop.

READ THIS NEXT Arsenal's 1989 triumph, told by the players

It was chillingly simple. Nothing less than a 2-0 win at Anfield against the reigning champions would suffice for Graham’s title pretenders in the final game of the 1988/89 campaign. Alan Smith’s goal early in the second half (following Graham’s reassuring half-time tactical talk) gave the Gunners hope, but with a minute left, time appeared to have run out.

That was until the Gunners streamed forward in the dying seconds and, from Smith’s lobbed pass, midfielder Michael Thomas dinked the ball wide of Liverpool keeper Bruce Grobbelaar to grab the vital second goal. Arsenal had pipped Dalglish’s FA Cup-winning team to the title, thus ending their 18-year title drought.

Hammered 6-2 by Manchester United four days earlier and trailing champions Liverpool by six points following a two-point deduction by the FA for an Old Trafford brawl, unbeaten Arsenal needed victory to have any chance of catching Dalglish’s team in the 1990/91 First Division title race.

It was the season’s pivotal moment. With the home crowd telling the FA what they could with those deducted two points, the Gunners went from strength to strength and overhauled a stuttering Liverpool to scoop the trophy comfortably. Dalglish resigned early in the New Year.

Arsenal should have wrapped up the 2001 FA Cup Final before the hour mark. First Thierry Henry skipped past Sander Westerveld, only for defender Stephane Henchoz to deny him on the line with a comical handball that went unpunished. Freddie Ljungberg finally put Arsenal ahead in the second half (becoming the first player to score in a Millenium Stadium FA Cup final in the process) and Henry spurned a glorious chance with 60 minutes gone.

But as Arsenal legs tired, Liverpool's Michael Owen smashed the ball home after a goalmouth melee to equalise, and with only two minutes left, the young England striker outpaced a flagging Lee Dixon and Tony Adams to drive home his team's winner past David Seaman from an acute angle. "He has won the FA Cup final for Liverpool all by himself," screamed ITV commentator Clive Tyldesley.

It hadn’t been a great week for Arsene Wenger’s side. Although still unbeaten in the Premier League on Easter weekend in the 2003/04 season, they’d been knocked out of the FA Cup by Manchester United in the semi-finals, and newly monied Chelsea won at Highbury to oust them in the Champions League quarter-finals. So when Liverpool went in at half-time at Highbury with a 2-1 lead, there were jangling nerves in the home dressing room.

But after the break, Arsene's French foreign legion got to work. Robert Pires equalised four minutes into the second half and Thierry Henry netted twice to complete a hat-trick in a 4-2 win, keeping Arsenal's title challenge on track and edging them a little closer to being the Invincibles.

With six games to go of the 2008/09 Premier League season, Liverpool were hot on the heels of leaders Manchester United, one point behind albeit having played one game more than Alex Ferguson's holders. Anything less than a win against Arsenal at Anfield would severely dent their title hopes.

Incredibly, there was only one goal in the first half of this heart-stopping sizzler on Merseyside, courtesy of Arsenal's February signing from Zenit, Andrey Arshavin. But the second was an altogether different story. Liverpool turned the game on its head via strikes from Yossi Benayoun and Fernando Torres, before Arshavin added his second and third goals of the game to haul Arsene Wenger's men back into the lead.

Torres grabbed an equaliser two minutes later for Liverpool – and that's how it stayed until the dying embers. With Liverpool desperately scrambling for the goal that would keep their trophy dreams alive, Arshavin delivered a sucker-punch fourth goal on the counter after a blistering run from Theo Walcott. The hosts got their just rewards with a late, scrambled equaliser from Benayoun... but the damage was done.

Liverpool’s shellacking of Arsenal at a delirious Anfield in February 2014 was arguably the highlight of a sensational campaign which took them to within a whisker of their first Premier League title.

Arsenal – who’d led the title race for much of that campaign – played a suicidal match defensively, but Liverpool’s attacking potency was breathtaking. Defender Martin Skrtel put Brendan Rodgers’ side two goals up within 10 minutes, before lightning strikes from Raheem Sterling and Daniel Sturridge gave the home side a 4-0 half-time lead.

Arsenal tightened up (somewhat) in the second half, but only after Sterling had added another to make it five after 52 minutes. Mikel Arteta’s penalty was the most unsatisfactory of consolation goals, and Rodgers claimed: “This was the best we’ve played since I arrived at the club.” But alas – there was to be no title for the first time since 1990.

OPINION The League Cup has a strength that the FA Cup doesn't – an ability to adapt to survive. Here's how to save it

QUIZ Can you name every player to score 10+ Premier League goals for Liverpool?