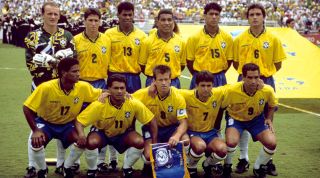 Brazil captain Dunga climbs up the stairs of the Pasadena Rose Bowl. Football history is in the making, the Selecao having just won a record fourth World Cup.

In a few moments, he will join Carlos Alberto Torres, Bobby Moore, Franz Beckenbauer and other legends in the selected group of men who have had the honour of being handed the sport's most coveted trophy. With the gold medal already hanging round his neck, Dunga finally meets Alan Rothenberg. The chairman and CEO of the tournament's organising committee shakes his right hand and quickly reaches for the trophy, passing it onto the buzz-cut Brazilian, who immediately kisses it.

Dunga then turns to the sea of photographers and lifts the trophy above his head, shouting: "This is for you, you treacherous b*st*rds! What do you say now? C'mon, take the pictures, you bunch of treacherous motherf**kers! It's for you!"

Give or take a word, this was the acceptance speech of the 1994 World Cup trophy, and to most Brazilians its vulgarity was matched by the football that took the team to title. After a 24-year drought, Brazil were once again on top of the world, but the feeling at home was that Carlos Alberto Parreira's side, with their pedestrian and defensive-minded performances, didn't belong in the same league as previous Brazilian World Cup winners.

While the boys of 1958, 1962 and 1970 had taken the world by storm, earning Brazil the epithet of 'kings of football', the class of 94 were more likely to induce snoring than superlatives. In fact, for the majority of the press and public, the 94 team were beyond dull; they played anti-football, turning the beautiful game ugly.

Dunga's blast at the media - some present in Pasadena, others at home - showed that the resentment was mutual.

Parreira and his team gave the country what they wanted, just not how they wanted it. But after two-and-a-half decades of seeing fantastic Brazil teams fall short, perhaps it was too much to ask. The generation of Zico and Socrates, who embodied futebol arte, had failed in two World Cups in the 80s, coached in both tournaments by Tele Santana. Yet - after the ill-fated reign of Sebastiao Lazzaroni, who, at Italia 90, oversaw Brazil's worst World Cup showing since 1966, and a short stint by 82 playing legend Falcao - it was Santana who the public wanted back at the helm.

Ricardo Teixeira, son-in-law of FIFA boss Joao Havelange and president of the Brazilian Football Federation (CBF), had other ideas. He decided to recall the duo who had masterminded the 1970 World Cup victory, this time with Parreira as head coach (in 1970 he was one of the team's physicians) and Mario Zagallo, the former manager, as technical co-ordinator. But this time, victory was all that mattered.

Carlos Alberto Parreira had a scholarly approach to the game, and it was no secret that he envied the discipline and tactical organisation of the top European sides. Up to 94, though, he'd hardly covered himself in glory: his only major title was the 1984 Brazilian championship, won with Fluminense. He spent the majority of the following decade working for petrodollars in Saudi Arabia, Qatar, Kuwait and the United Arab Emirates, before returning to Brazil to coach minnows Bragantino.

Going against the grain

Nevertheless, he was an intelligent, hard-working, well-prepared man, a compulsive reader of foreign football newspapers and magazines. Methodical and conservative, Parreira believed the best form of defence was defence. In a culture that glorifies attacking play, it's little wonder he met opposition from day one.

But he was a man on a mission, as his pal Zagallo recalls. "We went through a lot. People indeed protested, saying that it wasn't the true Brazilian football. But we knew what we were doing: we were building a solid, competitive team, not to entertain, but to win the World Cup."

At first, however, they couldn't even win, let alone wow the public. In the build-up to the World Cup qualifying campaign, in 1993, Brazil drew with Graham Taylor's England and surrendered a three-goal lead against Germany. In the Copa America, they fared little better, losing to Argentina in the quarter-finals after a penalty shootout. In the US Cup, Parreira chose veterans like Taffarel, Jorginho, Branco and Careca; in the Copa America, the squad was made up of domestic-based youngsters like Roberto Carlos, Edmundo and Cafu. Neither team clicked.

When the qualifiers came around, Parreira went with the more experienced players - including, to the public's despair, Dunga. At that time, the midfielder was the personification of all that was wrong with Brazilian football: ugly, regressive, winless. He was blamed for the defeat against Argentina in 1990 and christened 'the lost Lazzaroni generation': the Dunga era was something Brazilians never expected to see return. Except for Parreira.

The Dunga era, part II, kicked off in July 1993, with the beginning of the World Cup qualifiers and initially looked like being a sad rerun of the Lazzaroni fiasco. In the first two games, Brazil drew with Ecuador and lost to Bolivia - the Selecao's first ever defeat in a World Cup qualifier.

Cue bedlam back home: the press slaughtered Parreira's 'dinosaurs'. Playing in a predictable 4-4-2 and desperately in need of inspiration - Rai and Zinho were underperforming - Brazil needed an attacker who could do on his own what the 10 others couldn't do between them. Fortunately, Brazil happened to have him: Romario.

The problem was that Parreira and Zagallo insisted on leaving the tiny genius out of the squad for disciplinary reasons. In December 1992, the PSV Eindhoven striker blasted the duo for not fielding him in a friendly against Germany. "I can't believe I came down from Holland to sit on the bench," he fumed. 'Shorty' would only return in the last qualifying game, against Uruguay, at the Maracana. Predictably, he scored both goals to seal Brazil's spot at the World Cup - and his ticket to party in America.

"It's my fifth World Cup. I also went to two Olympics. A socialite, a comedian or a rock star won't tell me what to do. I won't change my mind." Parreira was clear: it would be his way, no matter what the public thought. For instance, he chose the overweight Branco at left-back instead of the jet-heeled youngster Roberto Carlos. But with Romario in the squad - albeit with an uneasy alliance with the management - anything was possible.

Brazil cruised through the group with easy wins against two weak teams - Russia and Cameroon - and a draw against a decent Swedish side. The last 16 was a different story, with hosts USA putting up a fight - almost literally at times - on Independence Day. Quality won through, though, Romario putting in Bebeto for the only goal. But it was still pretty turgid stuff.

In a thrilling quarter-final against Holland, the 'dinosaur' Branco - who was only in the team after Leonardo nearly decapitated Tab Ramos with an elbow in the previous round - went from villain to hero, hitting in a free-kick from miles out to clinch a 3-2 victory. But it was back to the borefest for the semi-final, against group opponents Sweden. Romario, again, was the difference, leaping above much taller opponents to head in the winner.

And so to a repeat of the 1970 final against Italy. Well, kind of. While Pele, Rivelino, Jairzinho and Riva dazzled in Mexico, this time both sides wilted under the afternoon Californian sun, two international giants seemingly happy to settle for a soporific 0-0 and penalties. In the first shootout in World Cup final history, it was fitting that Romario, Dunga and Branco scored to give Brazil the title, and cruel that Franco Baresi and Roberto Baggio sent their spot-kicks into orbit.

Yet despite the widely held - and largely true - belief that Parreira's tactics were hated at home, most Brazilians took to the streets to party like only Brazilians can, and the players were welcomed back as heroes with a parade through the streets. This was a World Cup win, after all; not even Brazilians are that nuts.

Johan Cruyff, then Barcelona coach, wrote at the time: "The secret of football is to keep control of the ball to pursue the goal. Only Brazil did it. For sure they could play more offensively and with more beauty, but there's moments when the spectacle has to be sacrificed."

Even Romario took the pragmatic view. "Parreira had to win the World Cup, so he formed the team the way he wanted. It's not necessarily the one the fans or me liked, but it did the trick."