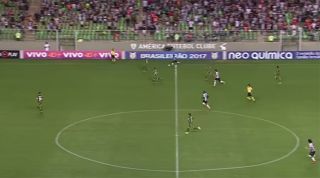 The 22-year-old broke the deadlock in the fifth minute, before Leonardo Silva doubled the home team's advantage on the quarter-hour mark.

But the greatest moment of the contest was undoubtedly Otero's show-stopping strike.

In the 32nd minute, Otero picked up possession just inside his own half and, with no options ahead of him, opted for the spectacular by launching a fine strike over bemused Coritiba goalkeeper Wilson.

Otero's team-mates fittingly bowed down to the winger, whose stock is quickly rising in Brazil.

Has Brentford's Neal Maupay produced the miss of the season? (Answer: yes)