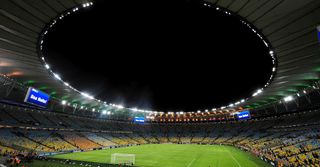 The 78,000-seater stadium has witnessed legendary football matches, triumphs at the Olympics... and now a couple getting down and dirty in the front row.

Brazilian outlet UoL Esporte report that they have seen the famous ground in the backdrop of the set, with its dried brown pitch and fabled coloured seats fully in shot, at around 3pm local time last Sunday.

But locals have been left infuriated at the stadium’s demise since the 2016 Olympics were held in Rio – renting the giant stadium comes at a high cost, which means that few of the city's teams actually bother playing there these days.

The young couple were said to have been filmed in the act on one of the seats at the ground.

So bad is the condition of the ground right now that such an act was able to be committed without prosecution.